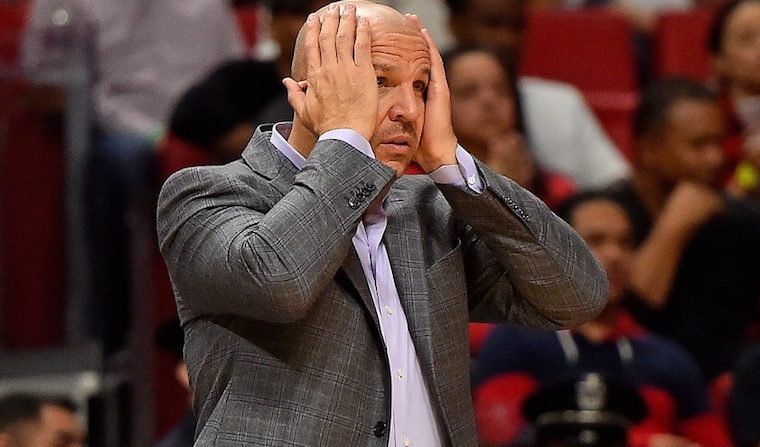 The Milwaukee Bucks are celebrating their 50th anniversary this season. During those 50 years, 10 members of the Basketball Hall of Fame have played for the team. Of those 10 players, only two — Kareem Abdul-Jabbar and Bob Lanier — played for at least five seasons with the Bucks.

So in half a century, the Bucks only got five seasons from a Hall of Famer twice. Based on what we’ve seen so far and the potential greatness Giannis Antetokounmpo clearly possesses, the Greek Freak has a chance to be the third Bucks Hall of Famer to actually play for this franchise in the long term.

Therefore, Monday’s firing of head coach Jason Kidd isn’t really about Kidd or the short-term state of the Bucks.

We could talk about how Kidd’s relationship with ownership seemingly soured, or how Milwaukee has fallen to the eighth seed in the East, never got to more than five games over .500 this season, or how the Bucks are down to 26th in defensive efficiency. Plenty of articles will discuss Kidd’s tenure as coach, his past as a player on and off the court, and his potential future in coaching, if there is one.

But coaches in the NBA always come and go. Jason Kidd was the 14th head coach in franchise history and only one, Don Nelson, is in the Hall of Fame. (Maybe George Karl gets in there one day.) Antetokounmpo’s happiness with this Bucks franchise, and the team doing whatever it takes to build a team around him that can compete for championships, needs to be Milwaukee’s mission statement.

For a 23-year-old who’s still only spent fewer than five years here in America, it was only natural to become attached to an all-time great player like Kidd. As Kidd leaked to Ramona Shelburne and others, Antetokounmpo tried to save Kidd’s job and was reportedly down about his ouster. Now that Kidd is out of the picture, Milwaukee is left needing to reassure Giannis that the franchise is on the right track.

“We believe that a fresh approach and a change in leadership are needed to continue elevating our talented team towards the next level, bringing us closer to our goal of competing for championships,” first-year general manager Jon Horst said in the team’s statement upon firing Kidd.

Their current core of Giannis, Jabari Parker (still recovering from his second torn ACL), Khris Middleton, Eric Bledsoe, Malcolm Brogdon and Tony Snell are all 28 years old or under. But that sextet, as Ben Falk points out, doesn’t constitute a championship-level roster. Milwaukee owes Phoenix a first-round pick from the Bledsoe trade, which could be conveyed this year if the Bucks don’t turn things around.

Antetokounmpo is signed through the 2020-21 season, but the Bucks already have the ninth-highest payroll in the league with more than $103 million in guaranteed salaries for 2018-19 and over $71 million guaranteed for 2019-20, per HoopsHype. So Horst and company have their hands tied a bit in how they can improve the franchise, unless it gets creative and is able to trade for a second superstar, or even a second All-Star.

Obviously, getting the right coach for Greek Freak and this team is vital as well. Early names mentioned have been former Pelicans head coach Monty Williams and recently fired Memphis Grizzlies coach David Fizdale. Others mentioned by Mitch Lawrence of Forbes include Jeff Van Gundy, Jerry Stackhouse and even Rick Pitino (if you’re listening, Milwaukee, please don’t corrupt poor young innocent Giannis with Rick Pitino). With one of the best players in the league like Giannis in the fold, Milwaukee should be able to get a top-level coach this summer, or whenever they decide to fill the opening currently being held in interim by Joe Prunty.

With little cap flexibility and three-and-a-half seasons until Antetokounmpo can be an unrestricted free agent, the clock is ticking for Horst and the Bucks to build a core around the Greek Freak that can compete for titles with Cleveland (as long as it has LeBron James) and Boston entrenched as the East’s heavyweights.

Jason Kidd’s tenure with the Bucks is in the past, and far from the focus on what’s transpiring with this team. What ESPN’s Bobby Marks tweeted on Monday is the real, crucial issue for Milwaukee: “The Bucks need to get the next head coach right. If not, it could be a franchise killer.”

With Antetokounmpo just beginning what could easily be a Hall of Fame career, one that could make him one of the few greatest players in Bucks history, Milwaukee needs to hire the right coach — cashing in on an opening made desirable by Giannis’ other-worldly talents — and make the right personnel moves in order to win games and ensures the Greek Freak remains happy with the team’s direction.

Milwaukee is never going to be a natural free agent destination, so its avenues for getting one of the league’s top five players are perpetually limited. The Bucks have one right now in Giannis Antetokounmpo. The challenge for the Bucks is to not mess up this opportunity, with one of the only potential all-time greats this team has ever had and the clock ticking on building a winner.