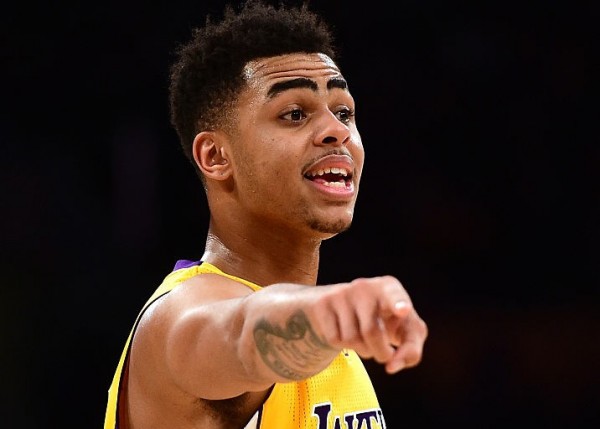 No. 2 overall pick D’Angelo Russell has been fine this season (though not as good as the other players taken in the top four of last June’s NBA Draft, Karl-Anthony Towns, Jahlil Okafor, and Kristaps Porzingis), averaging 12.2 points and 3.3 assists per game, with improved scoring figures in recent weeks. But the Lakers are 9-38, and the star rookie seems to be rubbing some authority figures the wrong way.

On Tuesday, coach Byron Scott benched Russell in a two-point game with two and a half minutes to play after the point guard missed a three-pointer that would have given Los Angeles the lead in what ended up a 92-90 Mavericks win.

After the game, Scott had a lot to say about the rookie, and most of it wasn’t positive.

“I saw the last couple minutes that he was in that he was really trying to take over the game, and that’s not him yet,” Scott said. “I want the ball to move a little bit. I thought it stuck with him. He tried to make the big shots and things like that. I understand that, but to me, that’s not him right now.”

In general, Scott said of Russell, “He’s been more aggressive to score. I think sometimes he’s taking what they’re giving him, and I think there’s other times where I think he’s kind of forcing the issue. He has to find a happy medium. He’s learning.”

“I love the fact that he has confidence,” Scott said. “When it gets to the point where it’s cockiness, then we’ve got a problem.”

Is he close to that point of cockiness where it becomes a problem?

“I think he’s pretty close,” Scott said. “I don’t think he’s there. I just think he feels right now that he’s got a lot of confidence in himself. Like I said, that’s a good thing. You don’t get this far without having that. And sometimes you don’t get this far without having a little cockiness, as well. But you don’t want that to overshadow the confidence that he has.

“I think when you get cocky, you’re thinking that there’s nothing that you can’t do. And if you think that, then you stop working.”

Publicly calling one of your key players cocky seems to be begging for trouble, unless you think the guy desperately needs some public shaming.

Russell, for his part, was predictably not thrilled with being benched in crunch time:

“We had four, five playmaking players out there,” Russell said. “I feel like everybody was trying to [take over]. They’re a veteran team. They rarely mess up. So when you catch them slipping a little bit, you’ve got to take advantage of it.”

As Russell added, “I feel like I was taking advantage of what they were giving me. It was a small split window of taking a shot or passing it up with a shot-clock violation on the line. It was always in my hands and I had to take a shot. I missed it. I don’t know if [Scott] would’ve said that if I was making those shots.”

This spat comes days after Kobe Bryant reportedly singled out Russell and Julius Randle during an angry address to the team. Asked about that criticism, Russell responded, “no comment,” according to the Los Angeles Daily News.

Russell is obviously a crucial part of the Lakers’ future, so hopefully for their sake everyone gets on the same page over there. For now, these issues don’t seem like more than rookie growing pains and natural last-place frustration.