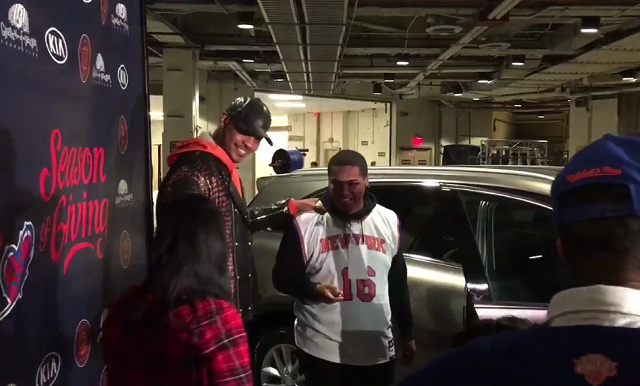 Carmelo Anthony started the NBA Christmas Day marathon out on a fantastic note Sunday, and this was before he dropped 29 against the Boston Celtics in a game that went down to the wire.

Prior to the game itself, Anthony met with a 17-year-old New York Knicks fan who is battling cancer and gave him the surprise of a lifetime. On behalf of the The Carmelo Anthony Foundation, Garden of Dreams Foundation and Kia, Anthony handed the youngster the keys to a brand new car.

The fan, Jarell Lara, had just finished 18 months of chemo and other cancer treatments. He and his family were at Madison Square Garden for the game, already sitting courtside thanks to Anthony — but completely unaware that one of Lara’s heroes would also be playing the part of Santa Claus.

The struggles Lara and his family endured just to get this point are heartbreaking, which only makes this moment that much sweeter.

The family currently shares a single car that is constantly breaking down. The back doors no longer open, forcing Jarell and his siblings to climb through the passenger seat in order to get in the backseat, an MSG spokeswoman said.

MSG described Lara as a 17-year-old “die-hard Knicks fan from Washington Heights,” whose family has had to make a lot of sacrifices due to the illness, including moving recently from their beloved Washington Heights home to a cheaper place in the South Bronx.

Anne [Lara’s mother] also had to quit her job as a medical assistant when Jarell was diagnosed in order to be able to take him to his appointments and to be with him during his treatments.

And as if the car was not enough, Anthony had already treated the family to a $2,000 shopping spree at Target earlier this week.

Anthony also spoke with ESPN, saying this was “bigger than sports,”  and we absolutely agree.