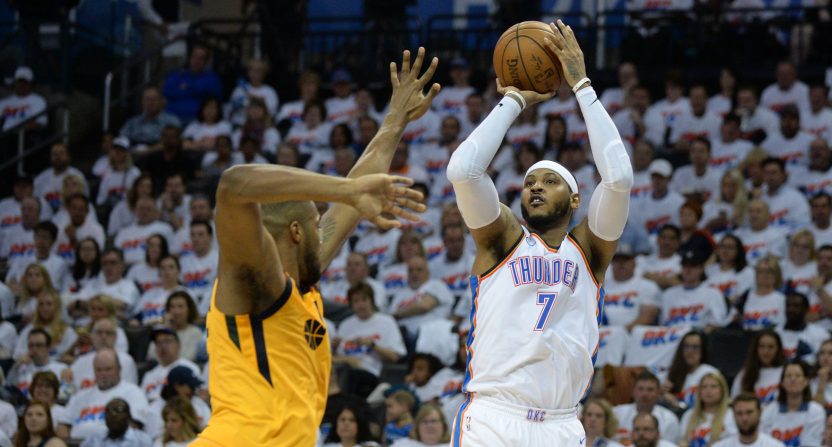 As the Golden State Warriors, Los Angeles Lakers, and Houston Rockets spent the offseason trying to shore up their statuses as the Western Conference elite, the Oklahoma City Thunder have been doing what they can while also dealing with an albatross hanging around their neck that was always going to keep them from competing at the top level. That albatross was Carmelo Anthony, the once All-NBA player in the twilight of his career who came with a monster contract (a $27.9 million contract for the 2018-19 season alone).

Anthony’s contract was the most massive on a team dealing with a historic $310 million payroll and the taxes that come with it. With no one willing to take on Anthony’s deal and Melo seemingly uninterested in leaving, it looked like the Thunder were simply going to have to grin and bear it.

Friday, however, that apparently changed. Per Adrian Wojnarowski, OKC and Melo are working out the logistics on how to part ways at some point this summer in a desperate move that will save the team over $100 million and help them avoid massive luxury tax payments.

The two sides seem to have found common ground on two issues. One, Anthony sees himself as a talent that deserves more than the role he’s being promised on the Thunder roster. Two, the Thunder recently pushed themselves past a historic NBA threshold when their payroll passed $300 million, which requires the team to pay $150 million in tax on the 2018-19 season’s roster, assuming it remained intact all season. By working out a deal, Melo has the chance to go elsewhere and potentially (albeit unlikely) find the playing time he’s looking for while Oklahoma City can avoid that tax payment.

Per Woj, it’s unclear how the two sides will part. It could end up being via trade, the NBA’s stretch provision, or a combined buyout and stretch, according to his sources. The stretch provision, which would literally stretch out the value of the contract over a longer period of time, would take $90 million in taxes off the books. It would basically spread Melo’s salary across three seasons at $9.3 million per year.

As for which teams might be interested in the 34-year-old, it’s a bit of a conundrum. As Nate Silver points out, Anthony has basically regressed into being a replacement-level player, and he certainly doesn’t have the appeal he once did as a shooter. However, if he were willing, he could make for a solid role player off the bench to eat up minutes and shots. All eyes look to the Los Angeles Lakers where Melo could be united with LeBron and his wacky cast of outcasts and they attempt to piece together a season to scare the Golden State Warriors into making mistakes. It would undoubtedly be a one-year deal which could then free Melo up to look for a place willing to let him shoot in order to profit off his reputation.

Players like Carmelo Anthony rarely age gracefully on the court. As many will point out, his greatest crime was always being drafted the same year as LeBron James, whom he (and everyone else) could never live up to. Still, the 10-time NBA All-Star and four-time Olympic gold medalist has put together a Hall of Fame career, even assunset sets in.