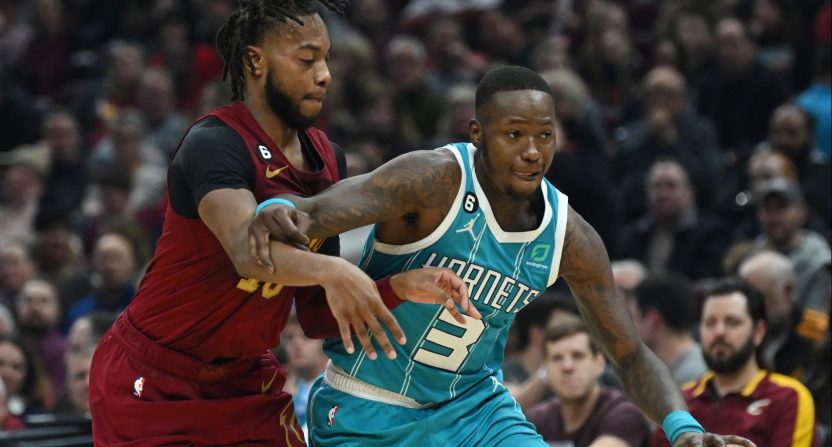 The Charlotte Hornets did not win Friday night, but in terms of sheer entertainment value, they were unbeatable.

The Hornets waged a furious rally against the Cleveland Cavaliers to overcome a 10-point lead in the final 45 seconds of regulation to force overtime. They then took the Cavaliers, 10-point favorites, to a second overtime before falling apart in that extra period.

While the Hornets (4-13) looked outmanned most of the night — their best player, LaMelo Ball was out injured — they were unstoppable in that final stretch of regulation. Guard Terry Rozier sent the game into OT with an off-balance 3-pointer from the corner.

Terry Rozier nails a three to send this game into overtime. The Cavs led the Hornets by 10 with 45 seconds left.pic.twitter.com/dBI8XnwTTy

Rozier also hit a big 3-pointer in the first overtime to put the Hornets up.

But in the end, the Cavaliers were too much for Charlotte. Guards Darius Garland (41 points) and Donovan Mitchell (34) paced the scoring, but Evan Mobley made the play of the night with this snatch block on a shot by Rozier.

This block from Evan Mobley 👀pic.twitter.com/YZxzHleyXH

NBA fans were amazed by the Hornets’ incredible comeback.

“Cavaliers ended a five-game losing streak, but needed two overtimes to beat the Hornets,” tweeted Andy Bailey. “In Cleveland. With no LaMelo Ball.”

The Hornets just outscored Cavs 12-2 over the final :45 and Terry Rozier's 3 just before the buzzer forces OT in Cleveland…Wild

Cavaliers ended a five-game losing streak, but needed two overtimes to beat the Hornets. In Cleveland. With no LaMelo Ball. pic.twitter.com/W4LWR1phJE

Terry Rozier vs. Evan Mobley feels like the most Friday night thing ever. pic.twitter.com/h5ImIizntX

Terry Rozier is a DOGGGGGGG OMGGGGGG

Darius Garland > Terry Rozier. Hornets went back to Terry way too much in those overtimes. He was spent, should have passed ball to someone else at end of 1st OT. GREAT Effort and Game.@iamnickrichards with the block of the year so far! Can't get over how his game improved