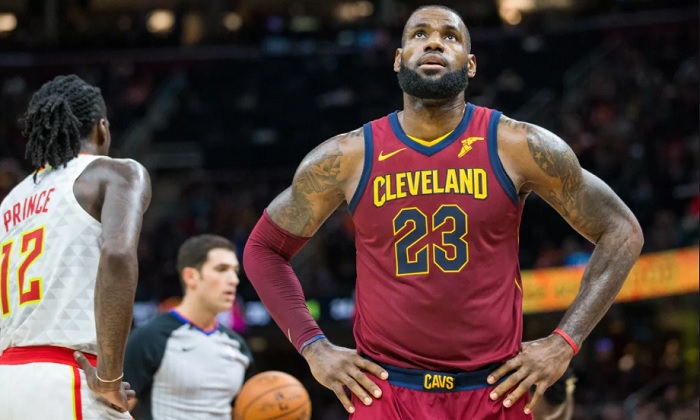 The Cavs. If you follow the NBA, you’re talking about them these days more than any other team, topic, storyline or otherwise.

What’s wrong with them? What’s going on? Why are they losing like this? Are they in trouble? Should we be worried? Concerned? Will this mean anything in a few months?

Over the past 15 days, the Cleveland Cavaliers have lost to six teams that probably won’t make the playoffs this season: Orlando, Brooklyn, New Orleans, New York, Indiana and Atlanta. (The Pacers, whose offense has looked great thus far, might reach the postseason in a weak Eastern Conference.)

Sunday’s 117-115 home loss to the Hawks could be the most troubling. Atlanta had lost eight straight and are as close to tanking this year as any team in the league. Cleveland was coming off a huge win over Washington on Friday night, snapping a four-game losing streak, in which LeBron James scored 57 points. Maybe that win over the Wizards would be the one to get the Cavs turned around, we thought.

Then Atlanta got out to a 27-11 lead, continuing the trend of slow starts for this Cavaliers team. After a loss to the Nets on Oct. 25, James discussed how getting behind early in games is hurting this team and the tendency hasn’t changed.

“I don’t know if I could put my hand or foot on it right now or we’d be much better. It’s just taking us too much time to get into the game, like get into the flow of the game,” James said. “Teams are playing with a faster pace than us to start the game and we have to figure that out for sure.”

Ten games into the Cavs’ season, they’ve led after the first quarter only twice.

After Jeff Green’s flagrant foul with 3:46 left in the third quarter, Cleveland’s deficit was 18. The Cavs made a furious comeback in the final minute, but Channing Frye’s 3-pointer missed with three seconds left and Atlanta held on.

As long as the Cavs have LeBron James, offense isn’t going to be a problem for them. Cleveland is in the top 10 in per-game and per-100 possessions scoring, field goal percentage and free throws made and attempted per game. The baffling and perplexing thing, and the main root of the Cavs’ problems right now, is the defense. Cleveland is dead last in points allowed per 100 possessions, 28th in scoring defense and is forcing turnovers on just 13.6 percent of opponents’ possessions, 26th in the league according to Cleaning the Glass. Compounding this issue is Tristan Thompson’s calf injury, which will cause him to miss at least the next few weeks, which will negatively impact the defense until he returns.

One major defensive problem is that teams are bombing threes on the Cavs. Cleveland has given up 13.4 threes per game this season, the most in the league, on 31.9 attempts per game, the sixth-most attempts per contest. Of the 73 corner threes attempted against the Cavs this season, opponents have hit 37 of them, according to NBA.com. That’s a 50.6 percent success rate, also worst in the league.

Those poor first quarters and slow starts have forced the bench to be really good in order to keep the Cavs in games, which is almost unfathomable on a team where LeBron James is a starter. If we look at on/off court totals, Cleveland has outscored its opponents the most when Kyle Korver, Iman Shumpert (who’s expected to return from injury on Tuesday) and Frye — all bench players — have been on the floor and fared the worst when starters J.R. Smith, Kevin Love, Jae Crowder, Derrick Rose and James have been on the bench, per NBA.com.

In an 82-game season, 10 games isn’t exactly a small sample size, but even average defense would turn this Cavs team around really quickly. Once head coach Tyronn Lue finds lineups and rotations that will improve defensively and not get off to such slow starts, Cleveland will be back on track and on its way to being the favorites in the Eastern Conference again.

Is 4-6 a poor start for a team with championship aspirations? Of course. The last team with a sub-.500 record after 10 games to reach the Finals was the 1980-81 Houston Rockets. But with the players Cleveland has, the problems that caused this slow start are correctable. Come out with energy, pace and aggressiveness in the first quarter. Do a better job denying the 3-point line.

Once the Cavs wake up and improve on those areas, they’ll get over .500, make the playoffs and be ready for another deep postseason run. The problems Cleveland is exhibiting are real and significant. But these problems can and will be solved in time so that fans and pundits can stop panicking, stop worrying and stop asking “what the hell is wrong with the Cavs?”