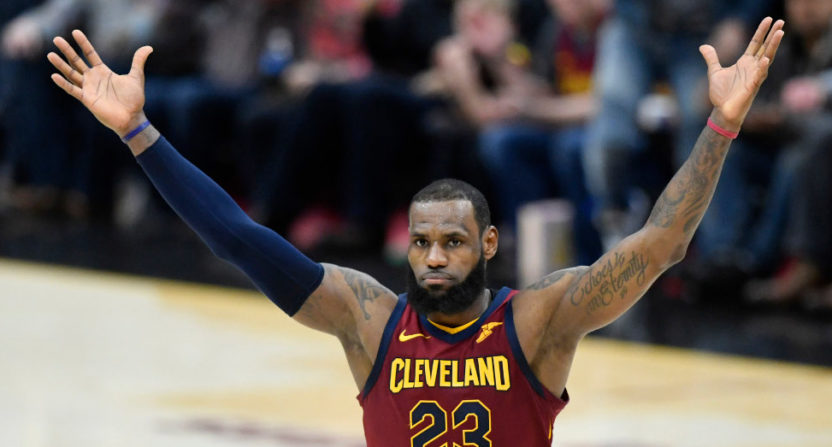 It’s been quite the week for NBA comebacks. On Tuesday night, the Boston Celtics became the first NBA team this season to post a win after being down by five points or more in the final 16.8 seconds, and on Wednesday, the Cleveland Cavaliers beat the Toronto Raptors 132-129. That made the Cavs the first team since 1990 to win after allowing 79 or more first-half points:

The Cavaliers won despite allowing 79 points in the first half.

No team had won after allowing that many points in the first half since Nov. 7, 1990, when the Spurs came back to beat the Nuggets after allowing 90 first-half points. pic.twitter.com/HQov1z10Fe

How’d they do that? Well, a historic turnover-less performance from LeBron James helped:

LeBron James is the first player with 35 points, 15 assists and no turnovers in a game since turnovers were first tracked in 1977-78.

LeBron James is the third player in past 10 seasons to record 17 (or more) assists without a turnover in a game.

That’s pretty, pretty good, especially considering that unlike those other two, James isn’t a point guard. Of course, Skip Bayless et al will still find ways to bash James over that, but that’s quite a dominant performance from him. Kevin Love also chipped in a nice 23-point, 12-rebound, four-assist night. And it’s an impressive win for the Cavs, who improve to 42-29 (third in the East, behind the 48-23 Celtics and the 53-19 Raptors), and a nice comeback, as they trailed 79-64 at the half (thanks to being outscored 41-22 in the second quarter). And it gave them a historic comeback, and even made them an answer to a trivia question.