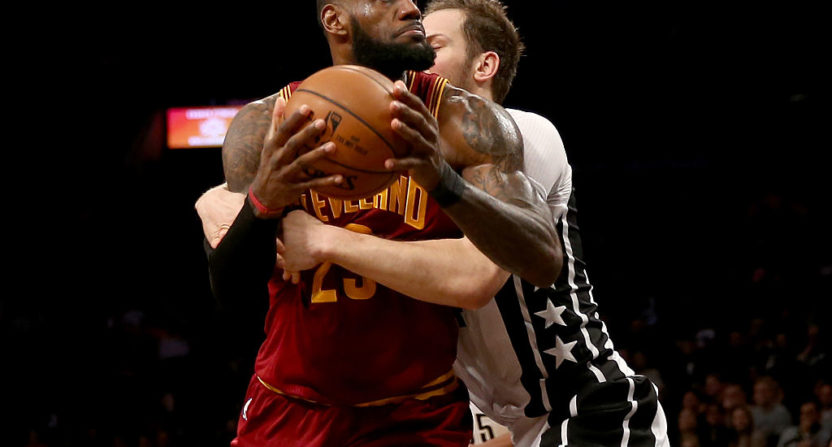 The Isaiah Thomas-Kyrie Irving trade melodrama is mercifully behind us. Now we can all move on to the next major question on the horizon.

What exactly are the Cavaliers going to do with that Brooklyn Nets pick they acquired from the Celtics?

The Cavs struck paydirt in their trade with the Celtics, not only gaining a current All-Star in IT4 (in spite of any lingering concerns about his hip injury that delayed the trade a week) but an asset for the future in the Nets’ first rounder. And in spite of the fact that Thomas should be able to keep the Cavs in contention for the Eastern Conference title and a fourth straight matchup with the Warriors in the Finals, Cleveland has made no secret of the fact that the crown jewel of the deal was the pick. Via Adrian Wojnarowski at ESPN last month:

Talk to the Cavs’ decision-makers about the Irving trade and before they bring up the offense that Thomas brings or the defensive versatility of Crowder, they mention the Brooklyn pick as the crown jewel of the package they received from Boston. Quite simply, it opens up endless possibilities. It’s the type of chip that can be sent elsewhere to acquire a talent like DeMarcus Cousins should the New Orleans Pelicans give up on the Anthony Davis pairing, or be dangled to the Memphis Grizzlies should they make Marc Gasol available.

The pick opens up a lot of possibilities for the Cavaliers because it gives them an asset they haven’t had in a long time. While the specter of having a franchise building block in their back pocket just in case LeBron decides to leave in 2018 is attractive, using that pick to bring in another superstar to help them win a second title might be too tempting to pass up.

A note in Joe Vardon’s recent Cleveland.com column would give credence to that latter thought because the Cavs are already receiving calls about their new draft selection.

As owners of Brooklyn’s No. 1 pick, which could be a top-five pick in next year’s draft, Cleveland has fielded numerous calls already about a potential trade. It could be a part of a major trade package for the Cavs later this year, or, conceivably, the Cavs could make that pick next June.

Cleveland also has its own first-round pick in 2018, which it can trade. The Cavs also have multiple trade exceptions and second-round picks, and are pleased with their assets for potential trades or to replenish the roster in the event of a rebuild.

We won’t really know how valuable that pick is until we see just how well… or how poorly… the Nets do this season. They’ve been one of the laughing stocks of the league for the last few seasons as their infamous trade with the Celtics years ago becomes more and more lopsided with seemingly each passing day. But if the Nets surprise and they’re just outside playoff contention come January, suddenly that asset becomes a lot less valuable in trade negotiations and Cleveland might just be stuck with it and rolling the dice they can land a great player for the future.

But… if the Nets do suffer another struggling campaign and are near the cellar of the NBA standings, then teams might be willing to part with some pretty good players to earn the rights to the pick. It’ll be a huge, huge decision that could set the course of the franchise for either LeBron’s final years of his career in Cleveland or another rebuilding project. With Isaiah Thomas likely out for a while and the fully formed new look Cavs a few months away, Cleveland fans might be more interested in how Brooklyn performs during the first few months of the season to see how their newest and best asset is coming along.