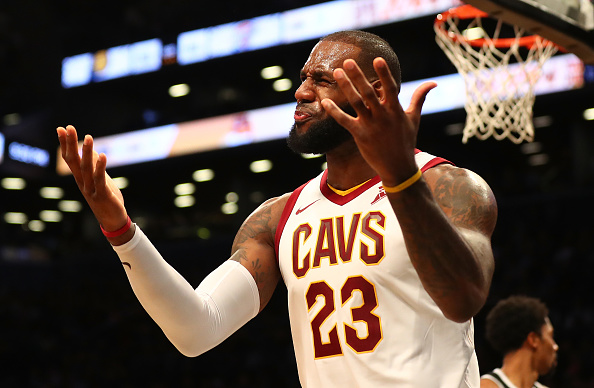 With Isaiah Thomas out until at least midseason while he rehabs an injured hip and Derrick Rose currently out with a sprained ankle, the Cleveland Cavaliers have addressed their current lack of point guard depth with a surprising, and yet simultaneously obvious choice: LeBron James.

Despite not having officially started at the position since 2012, James was listed as the starting PG for Tuesday’s win over Chicago and Wednesday’s stunning loss at Brooklyn. Following Rose’s injury on Friday, Jose Calderon started a night later in a shocking defeat to Orlando, one that may have made the team rethink its more conventional options.

As someone who always handles the ball anyway, Cavs head coach Tyronn Lue’s choice wasn’t that unorthodox or unusual, even if necessity was its catalyst.

“I know everybody else was amazed by it,” Rose told The Comeback, “but he plays point guard every night.”

James’ first start went relatively smoothly. Cleveland trailed by 10 after the first quarter and by one going into the fourth, but won 119-112 — with Calderon not playing at all — as LeBron put up 34 points and 13 assists, setting the Twitterverse abuzz. SportsCenter posted a graphic that James had more 30-point, 10-assist games in just 47 games (up to that point) as a starting PG than Thomas, Kyle Lowry, Kemba Walker and frenemy Kyrie Irving had in their entire careers.

“The only difference for me is we put the PG on the stat sheet,” Calderon told The Comeback.

Calderon was signed on July 10 and Rose on July 25 to add depth to the point guard position behind Irving, an upgrade from last year’s reserve duo of Deron Williams and Kay Felder. When Irving was traded to Boston on Aug. 30 for a package featuring an injured Thomas, it meant that Rose and Calderon would slide into more important roles early on in the regular season.

“When I signed here, I knew my role right away and I’m really happy and excited to be part of this team,” Calderon said. “If it’ll be one minute, zero, whatever. I gotta be ready.”

Despite the likelihood that he could’ve found a more prominent role on a different team, Rose said he wanted to get back to playing for a winning team, to get back on playing on a bigger stage.

“My job is to come in and help the team get back to where they were last year,” he said. “It feels good just to be on a winning team. I’m happy. I appreciate it. I don’t take it for granted.”

On the plane ride to New York City following Tuesday’s win over Chicago, Wade’s knee swelled up to the point where he couldn’t play on Wednesday, Lue said. With Rose still out of the lineup, James would have to take up even more of the ball-handling responsibilities than he had the previous night.

“I always felt he’s their quarterback, so it doesn’t change it that much for us,” Nets head coach Kenny Atkinson told The Comeback.

Despite jumping to a 13-4 lead, Cleveland trailed 26-23 after the first quarter. After the loss to Brooklyn, James addressed another slow start for his Cavaliers.

“I don’t know if I could put my hand or foot on it right now or we’d be much better. It’s just taking us too much time to get into the game, like get into the flow of the game,” James said. “Teams are playing with a faster pace than us to start the game and we have to figure that out for sure.”

James had eight points in the first and was clearly making an impact at point guard and whatever else he wanted to do on the court.

“He can start at any position he wants to and it impacts us defensively,” Atkinson said. “When you do your scouting report for him, he moves around so much.”

Perhaps LeBron had to move around too much on Wednesday night. With Wade and Rose out and Kevin Love and J.R. Smith struggling, James seemingly felt pressure to do it all, as the point guard and sometimes as the center. According to Ben Falk’s great new analytics site Cleaning The Glass, LeBron’s usage rate and assist percentage, numbers that essentially show how much of a team’s offense is reliant on a single player, were both in the 99th percentile among all games played so far this season.

And forward and shooting guard and fry cook and gardener and sorcerer supreme and assistant to the regional manager and king of the north & https://t.co/755VpgYD31

LeBron posted a 29-point, 13-assist, 10-rebound triple-double, but was visibly frustrated at times during the 112-107 loss in which he committed eight turnovers, something he’s only done 35 times in his NBA career, per Basketball-Reference.

“It’s a lot of pressure to put on LeBron to have to handle the ball for 40 minutes,” Lue, an NBA point guard for 11 seasons, said. “That’s why I talk about playing the point guard position, it can wear you down. Unfortunately, it’s all we have right now until D-Rose and D-Wade get back.”

Rose and Wade are targeting returns to the Cleveland lineup for their next game on Saturday in New Orleans. That should alleviate the Cavs’ temporary need for James to step in as the starting point guard. But with Rose and Wade as injury, and rest, prone as they are, it very well may not be the last time we see Point Guard LeBron try to win games single-handedly. PG LeBron is something unique in name, yet something we as basketball fans are generally more than accustomed to.