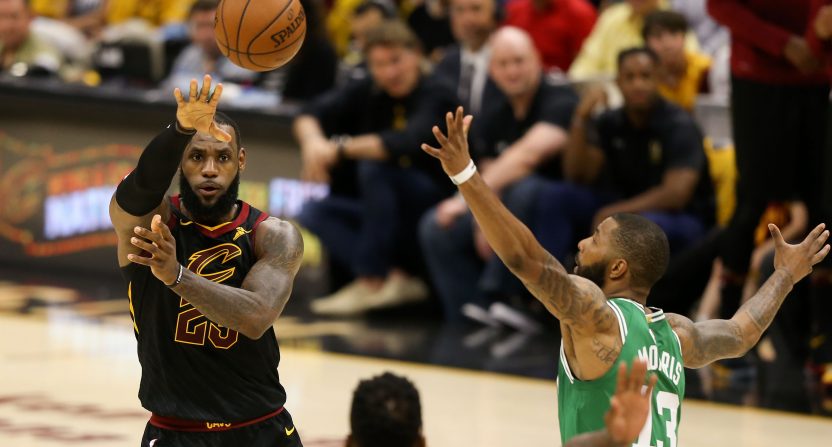 After they had a brutal start to the Eastern Conference Finals, the Cleveland Cavaliers stepped up with a 30-point victory in a must-win Game 3 against the Boston Celtics.

The Cavs pummeled the Celtics 116-86 on Saturday night in Cleveland, trimming Boston’s series lead to 2-1.

Cleveland led by as many as 30 points, and led by double-digits for the game’s final 42 minutes. And they got much, much better production in two areas they were terrible in Game 2.

For one, the effort on the defensive end was significantly better for Cleveland, as the 86 points allowed would suggest. The Cavs held the Celtics to just 39.2% from the field and 27.3% behind the arc.

And, after it was basically just LeBron James and Kevin Love scoring points in Game 2, the Cavs got contributions from many players in Game 3. Six Cavs players scored in double-digits, including the entire starting lineup. Cleveland was lethal from three-point range, nailing 17 of their 34 attempts (that’s 50% if you don’t have a calculator handy). Kyle Korver was 5-of-5 from the field and 4-of-4 on threes for 14 points off the bench.

Now, this was the game the Cavs were supposed to win, desperate at home in Game 3. And with how much the Celtics dominated the first two games, I wrote here how it’s hard to see the Cavs coming back to win these series, even though you can never count out LeBron.

But what we saw from Cleveland in this game was very encouraging and will give them a very real chance if they can keep it up the rest of the series: a committed defensive effort and teamwide contributions in the box score.

The Cavs will look to even up the series in Game 4 on Monday night in Cleveland.