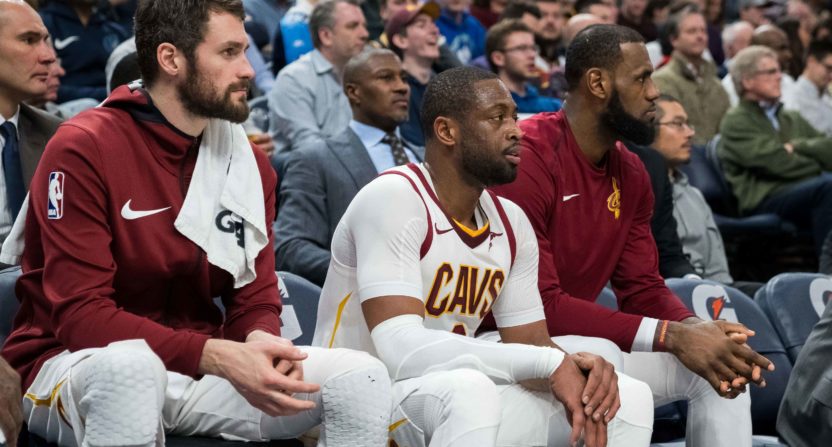 The Cleveland Cavaliers’ struggles have had their players so concerned, that they held what was basically an off-the-record press conference to three outlets earlier in the week. TNT/NBATV reporter Kristen Ledlow said that the mood in the Cavs’ locker room after the team’s loss to the Golden State Warriors on Monday was that of a team that is “broken.”

“It’s very rare to walk into a Cavalier locker room and to feel as though the team is broken. That was very much the mood.”@KristenLedlow on the state of the Cavs. #10BeforeTip pic.twitter.com/5rWjcoXGax

However, this is still a team with LeBron James, and it’s a team that plays in a very winnable Eastern Conference. Despite all of their issues, Five Thirty Eight still gives the Cavs the third-best chances (27%) to reach the NBA Finals. But things need to pick up substantially for that to happen, and it will be difficult for that to happen simply with the roster as is. This defense hasn’t been just bad this season, it’s been brutal. Cleveland’s defensive efficiency ranks only better than the 17-29 Suns and 13-32 Kings, and it’s pretty damn tough to win titles that way.

So, it should come as no surprise that the Cavaliers are expected to make a trade(s) before the Feb. 8 deadline, and they’re already being linked to several players.

The Cavaliers are pursuing separate deala for DeAndre Jordan and George Hill in advance of the Feb. 8 trade deadline, according to league sources

Stein adds that the Cavs “have also registered trade interest” in Clippers guard Lou Williams, and the Cavs’ J.R. Smith and Tristan Thompson could be part of trade packages. TNT’s David Aldridge confirmed the Cavs’ interest in Williams:

The Cavaliers have allso registered trade interest in the Clippers’ Lou Williams, according to league sources, with Cleveland vets such as Tristan Thompson and J.R. Smith featuring in various trade proposals.

Cavs definitely have asked about @TeamLou23, as @TheSteinLine reported. But told this week that talks so far have stalled on Clips’ request 4 Brooklyn pick.

(And the Hornets are reportedly shopping guard Kemba Walker, and it’s assumed the Cavs may have interest there as well.)

So, it certainly appears that the Cavs don’t want to just add a player; they want to add an impact player. NBATV’s J.E. Skeets summarized it all quite well:

The Cavaliers are pursuing separate deals for Larry Bird, Magic Johnson, Shaq, Jesus Shuttlesworth and Air Bud in advance of the Feb. 8 trade deadline, according to my sources.

But of the (actual) rumored targets, DeAndre Jordan is definitely the one that would offer the biggest impact for Cleveland. The 29-year-old center is second in the NBA in rebounds per game (14.9), and eighth in the NBA in double-doubles (25). He would give the Cavs the rim-protecting big man they’re lacking, and make them a much more dangerous team in a playoff series against the top teams.

George Hill is probably the most realistic addition, and one they could make without giving up their highly valuable Brooklyn draft pick in 2018 (one that should be a top-10 pick in a loaded draft). He would provide the Cavs with solid guard play — terrific three-point shooting — and a big upgrade on the defensive side of the ball.

And Lou Williams is very intriguing with the superb season he’s having. The 31-year-old guard is averaging 23.2 points and 5.0 assists, and his 22.32 Player Efficiency Rating ranks 27th in the NBA. However, his game is fairly similar to Isaiah Thomas’, so it’s debatable how much he would truly upgrade the Cavs in comparison to other trade targets (and when you factor in the likely trade cost).

There are sure to be several more names to emerge as Cavs trade targets in the coming weeks, and it will be interesting to see what player(s) they ultimately decide on. And it will be interesting to see if they’re forced to give up the Brooklyn pick, which could easily turn out to be the most valuable asset involved in a deal before this year’s deadline.