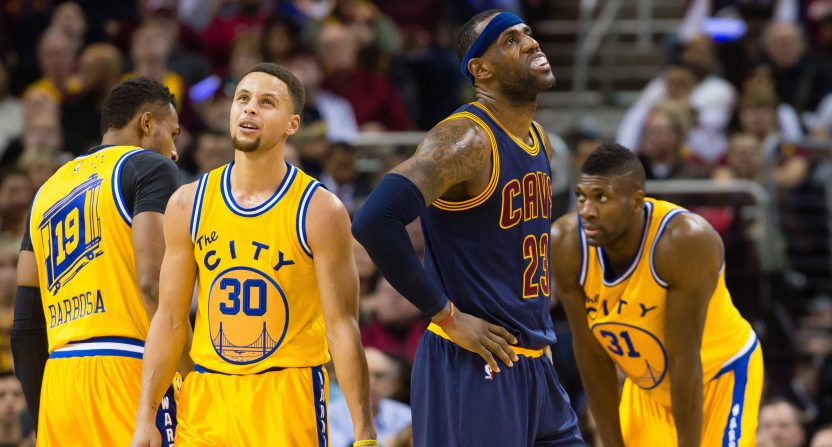 In sports and in life, we love to speak in inevitabilities. In August, we pronounced Hillary Clinton the next president of the United State. In December, we anointed Alabama the undefeated national champs. In February, we proclaimed La La Land a lock for Best Picture.

When we look into the future, we often perceive great clarity in our crystal balls—even when they’re actually quite murky.

So it was tantalizing, at the start of this NBA season, to declare that the Cavs and Warriors were destined for a third straight Finals clash and that the entire regular season and the first three rounds of the playoffs were just anticlimactic foreplay. What’s even the point of playing the season, we cried, when we already know which teams will meet in June?

But in the last few weeks, we’ve seen the danger of believing in inevitability. In sports as in life, there’s often much we can’t foresee.

Those unstoppable Golden State Warriors are stumbling through their worst stretch since they became The Warriors. They’ve lost three straight and five of seven, falling to teams both good (the Spurs, Wizards and Celtics) and bad (the Timberwolves and Bulls). Steph Curry isn’t quite as magical as he was last year, and Draymond Green’s mouth has been louder than his game. Kevin Durant, whom the Warriors made room for last summer by jettisoning several key players, is out with a knee injury, and Golden State hasn’t figured out how to replace him.

Meanwhile the Warriors’ presumed opponents in the 2017 Finals, the Cavs, have lost six of their past eight games, their second such streak in the past six weeks. Kevin Love is injured, the bench remains thin despite a flurry of additions, and LeBron James and Kyrie Irving sometimes seem to be taking on opponents by themselves. They traded for Kyle Korver, but now he’s out with a foot injury. They signed Andrew Bogut, and he broke his leg immediately. They acquired Deron Williams, and his production dropped off swiftly.

None of us brilliant prognosticators could have known that Durant and Love would get hurt, that Curry would dip, that the Cavs would have so much trouble building a bench, but that’s exactly the point. We never know what will happen months in the future. And yet we submit to the lure of inevitability anyway.

Of course, the Cavs and Warriors might very well end up meeting the NBA Finals anyway, thereby making this blog post—shaming people for jumping to conclusions—seem highly ironic. But we can all agree that future looks less inevitable than it once did. The Celtics and Wizards’ emergence means the Eastern Conference is stronger at the top than it has been in years, and the Spurs are extremely formidable, as usual, in the West.

If the Cleveland and Golden State are still favorites in their respective conferences, it’s not by much. A lot can happen in the NBA Playoffs, or even in the weeks leading up to the NBA Playoffs—injuries, shooting slumps, flukey upsets, and the favorites appear highly vulnerable a. Cavs-Warriors 3.0 looks less preordained than ever, not that it was ever inevitable to begin with.