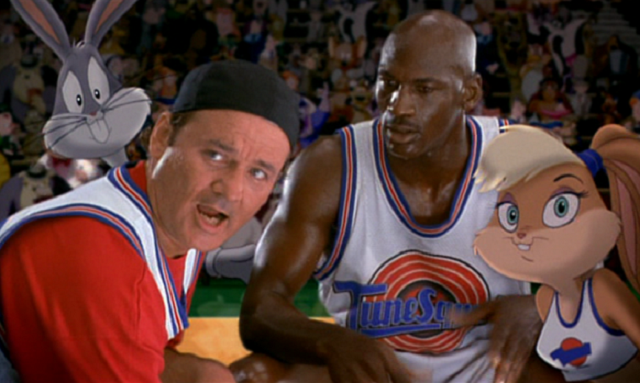 On Nov. 15, 1996, Michael Jordan appeared alongside Bugs Bunny and his Looney Tunes cohorts in a movie about basketball in space, something that had never been seen before on movie screens. Let’s wish a Happy 20th Anniversary to the greatest movie ever that featured an athlete as the star: Space Jam.

Space Jam was released a couple years after Jordan’s lackluster turn in baseball and during the midst of a historic run for Jordan. The movie was released one year into a three-year stretch for Jordan during which he won three NBA Titles and was named the MVP of the Finals each of those three years.

To say Space Jam came out at the perfect time would be an understatement. The movie had everything going for it: great animated characters, a star athlete in his prime, and a wacky storyline that could attract all ages to the theaters. Jordan gets trapped in an animated world and has to break out of “jail” by beating a bunch of aliens who steal powers from NBA players? That’s the 1990s in a single sentence.

If such a movie came out today, it might be a hit at first, but would most likely fade away. But Space Jam was the first major hit of its kind and remains a beloved piece of pop culture today.

Another reason why a movie like this would probably not work as well today is because the animation would look too realistic. Among the many things that makes Space Jam great is that it’s so painfully obvious that Jordan isn’t actually in the same world as the Looney Tunes and Monstars. He is clearly interacting with characters that we all know as cartoons.

Some call Space Jam the greatest sports movie of all time. That might be a bit of an overstatement. Come on now. But it definitely should be considered unique and one of the most creative ever made. Name a movie that has an introduction scene like this:

Could a movie combining beloved cartoons and sports get much better than that? Three things that made the movie great in 1996 and still make it so today are all featured in that scene: Fantastic music, painfully funny humor and Michael Jordan. Let’s take a closer look at each of those aspects.

There’s a reason why that song has 24 million plus views on YouTube. Yes, I did just listen to the song three times before returning to write this article. What work did that take you away from?

The music is stellar throughout the movie, featuring a surprising number of famous artists, including R. Kelly, Nile Rodgers, Shawn Carter/Jay-Z, Diane Warren, and so many more. Seriously, Jay-Z and R. Kelly performed in songs in the same movie in the 1990s. That’s amazing.

The humor works so well because of the real-life humans starring in the movie. Danny DeVito is the biggest name to play a non-Looney Tunes animated character, but on the human side of things, the cast includes Bill Murray, Wayne Knight, and Theresa Randle.

Athletes aren’t usually that funny to fans outside of their fan base, yet the basketball players in this movie all do a good job of making viewers laugh. Along with Jordan, Larry Bird, Patrick Ewing, Charles Barkley and others all play their part well and don’t try to overact. The only good recent example of an athlete doing this in a similar way would be LeBron James in Trainwreck.

Space Jam does a great job of using humor to attract all ages, whether it’s through jokes that make kids (the target audience, since it’s a mostly animated movie) or adults laugh. Appealing to both young and adult audiences with story and humor is what makes successful blockbuster films, which is why Space Jam was so popular and continues to endure. It still has the same affect on those age groups 20 years later.

Jordan is one of the most famous athletes in the world, and it certainly helped Space Jam to have him as the lead during the prime of his career. The movie didn’t just have an athlete as its big star; it featured the athlete, someone even non-sports fans were entirely familiar with. Jordan’s popularity and high profile continues 20 years later, long after his playing days are over.

Being a good guy who hasn’t done anything wrong helps the movie’s enduring appeal. Imagine if Jordan had committed a major crime like O.J. Simpson or was just a bad person in general who wasn’t still well liked today. Space Jam wouldn’t be so celebrated and remembered affectionately. People would boycott the movie if they were boycotting Jordan.

That’s obviously not the case. Jordan is still loved all over the world as a basketball player and personality, and even his baseball career is admired and joked about nowadays, as happens in this movie. He’s never been more likable than he is here.

Space Jam is a classic that never should be repeated. Should there really be a Space Jam 2? Why? This movie stands the test of time despite animation now being 10 times better, Michael Jordan being retired, music that’s dated and stylistically old, and the storyline is completely unrealistic. A sequel will only suffer trying to take advantage of its predecessor’s success and won’t come close to measuring up by comparison. Nobody wants to see that.

Even though it’s not an animated movie, look at Anchorman 2. The sequel is basically a remake of the first movie with a new title and a couple of new characters. Really though, the basic plotline is the same: Ron Burgundy is on top of the world, loses his job, gets into a fight with Veronica Corningstone, gets into a fight with other anchors from other networks played by movie stars, and gets his job back.

Most sequels or remakes falter because they try to be the same thing as their predecessors and don’t stick out as their own movie. Seriously, name a sequel or remake that is 90 percent or more the same as the original, and manages to be better. Can you come up with a list of 10?

That’s why Space Jam 2 has been stuck in “production” for so long. There have been tons of articles written about LeBron James taking over for Jordan in the second edition of the franchise, and Justin Lin (Fast & Furious 6) has even been hired as the sequel’s director. But there is no indication that development or production is under way, no photos of the set, trailers, or anything showing that the movie is anywhere close to becoming a reality.

Space Jam is a great movie that doesn’t need to be messed with. It has endured for 20 years and continues to be viewed affectionately by sports and cartoon fans. Why mess with that and ruin a perfectly fun legacy? Oh, yeah: money. There’s no other reason to make a Space Jam 2. Let Michael Jordan have the final shot in Space Jam history forever.

To further celebrate the 20th anniversary of Space Jam, here are some other great articles about the movie and its legacy: