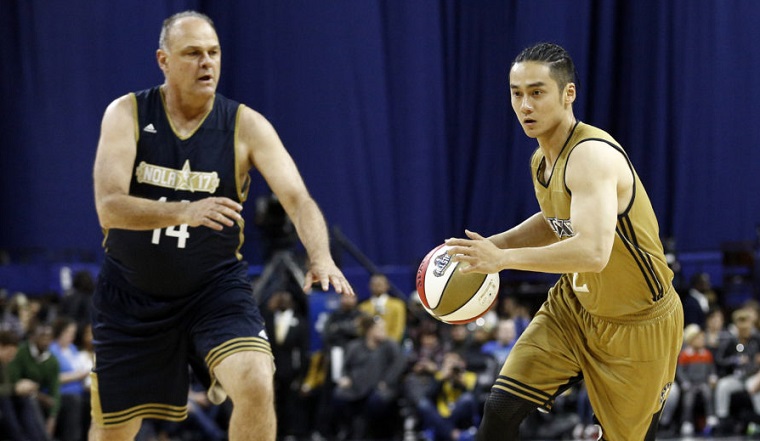 The NBA Celebrity All-Star Game is, annually, one of my favorite things to watch/hate-watch. The weird mix of real celebrities, semi-celebrities, the odd ESPN personality or two, and former NBA/WNBA stars makes for a typically bad game of basketball, though it does lead to fun moments.

Like when Doug Gottlieb took it incredibly seriously, including a full-court press steal of Ne-Yo:

I’m not the world’s biggest Gottlieb guy, but I did enjoy when he reflected upon the game with “Tighten up that spin dribble, Ne-Yo!”

There were also the years Kevin Hart was named MVP for trying too hard. Generally, it’s a game featuring former basketball players clowning celebrities (Scottie Pippen rejecting Bieber remains a highlight), with the occasional fun moment where a celebrity does something right.

This year’s list of participants is out, and it’s a typical group:

Here, now, are the celebrities I, an Internet writer in average shape, could beat one-on-one.

First, none of the former players are on this list. If there’s one thing people tend to do, it’s underestimate just how good real professional athletes are in their respective sports. (Pros vs. Joes needs a revival just to remind people of that.) This goes for WNBA players too. They’re really good. (Having said all of that, I think I could get one bucket on Paul Pierce.)

Here, now, are the remaining celebrities, and whether or not I could beat them, assuming a standard game to 11, 1s and 2s, win by 2:

Anthony Anderson is 47 and shorter than me. I’d beat him.

Brandon Armstrong is actually the NBA impressions guy, and I’ll be honest when I say I had no idea he was originally drafted by the Rockets. He’s 37, 6-foot-4, and he’d destroy me, because he technically counts as a former player. Also, he was part of the Pepperdine team that handed Indiana a ridiculous beating in the 2000 NCAA Tournament, scoring 22 points against the Hoosiers in what would be Bob Knight’s last game as coach, and providing a seminal moment of sporting disappointment for me as a kid. (I really loved A.J. Guyton.) Were I to play Armstrong one-on-one, I’d be handed a seminal moment of adult disappointment as well.

Miles Brown is apparently one of the kids on black-ish, and I would destroy him.

Win Butler is actually pretty good at basketball, or at least at being 6-foot-4 and willing to clean up garbage baskets. He was the 2016 MVP of the game, and followed it up last year with 22 points and 11 rebounds. He’s also famously temperamental. According to someone I know who worked very tangentially in the music industry, there were very strict rules about not contacting Win directly for any reason. Having said all of that, I think I could beat him. Also, The National is better.

Common plays in these things every year, it seems, but he’s 45 now. I’d beat him.

Andre De Grasse is a Canadian Olympic sprinter who grew up playing basketball. Here he is playing horse (outdoors in the wind, which is the only way to play it):

I probably could not beat him.

Dasha Polanco. I mean, come on.

Bubba Watson is tall, yes. He’s also far better at golf than I’ll ever be, and it’s possible he holds a grudge against me for leading the ultimately successful crusade to pick Ryan Moore over him for the 2016 Ryder Cup. Having said all of that, I’d embarrass Bubba Watson. Can’t blame your caddy on the court, Bubba!

someone please dunk like the god of thunder on bubba watson https://t.co/wHP1Y4QhL9

Sterling Brim looks like he can play a bit, and he’s around my age.

My video editing skills are horrendous but I’m SOOOOOO excited to be playing in this years NBA Celebrity All-Star game @nbaallstar so I figured I’d give you all a preview of what to expect Friday Night LOL gonna be a lot of Fun.

This is a tough one, because while he clearly has some handle and is obviously proud of his stepback, he’s also reportedly 5-foot-8, and I get the feeling we’re not seeing all of the bricks that tend to result from pull-ups like that. I think I could beat him.

Nick Cannon is 37 now, which, holy shit. I need to sit down. Drumline came out 15 years ago!  How is this possible? Anyway, I’d beat Nick Cannon handily.

Terrence Crawford is only 5-foot-8 and just moved up a weight class to box in the 147-pound division, but he’s also one of the best boxers in the world, and legitimately a world class athlete. I’d probably let him win.

Rachel DeMita is tiny, but holy shit, she played college ball at Old Dominion and it shows.

I do not know if I could beat Rachel DeMita.

Marc Lasry is 58 and the co-owner of the Bucks. He has plenty of old man game.

I would beat Marc Lasry.

Caleb McLaughlin plays Lucas on Stranger Things, and he’s 16, so he’s probably in better shape than me. But I think I could beat him. We’re playing ball, not running a mile.

Drew Scott is one of the Property Brothers, and like Win Butler, he’s tall and Canadian. He occasionally dunks on the show, probably to mask the fact that his brother does all of the real work while Drew pops up again at the end of the hour (often wearing what looks to be the same suit) to claim part of the credit. He’s not used to getting things done himself is what I’m saying, and that doesn’t translate well to a game of one-on-one. I’d beat him.

Kris Wu is 6-foot-2 and looks like he can play, as this lovingly stalkerish video of his 2016 exploits shows:

This is his third celebrity game.