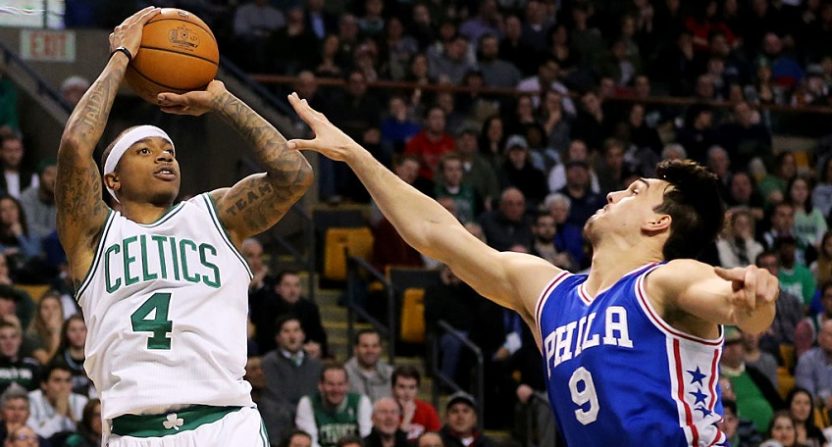 Soon after details emerged around the Boston Celtics’ and Philadelphia 76ers’ trade involving the No. 1 overall pick in the 2017 NBA Draft, the horse race was on. Who won the deal, and who got fleeced in the rare transaction involving the top selection in the draft?

Boston sent Philadelphia its first overall pick, which will almost undoubtedly be Washington’s Markelle Fultz. The 76ers shipped out this year’s No. 3, along with a conditional first-rounder in either 2018 or 2019.

Given Fultz being the consensus No. 1 selection for quite a while, and the Sixers being in need of a point guard, the swap was a no-brainer for them. The young core adds yet another top pick to join what’s become a raft of young talent. Ben Simmons, Joel Embiid, Jahlil Okafor, Dario Saric and Nik Stauskas only scratch the surface of what’s already on the roster. But the missing piece is a capable point guard.

The conditional pick is unlikely to cost them because of the team’s upward trajectory, which is enhanced by Fultz joining the squad.

For Boston, in win-now mode, there’s no harm in dropping back a bit if they didn’t need Fultz, while also adding yet another first-rounder to a collection of future chips. The Celtics also own the Nets’ 2018 first-round pick and (potentially) the Lakers’ 2018 as well, along with 2019 picks from the Grizzlies and Clippers as well. If the team wants to go out and trade for a veteran on a rebuilding team, this strengthens that list of assets even more.

Some early grades declared the 76ers the winner of this deal, though really, the trade’s incredibly even for what these teams are right now (and what their needs will be down the road). Truly even swaps are a rare occurrence in sports — especially around picks — and yet, this high-profile deal seems to be the exact remedy needed for both parties.

You can’t say the same about the other six deals for No. 1 picks, however. As For the Win’s Deputy Editor Adi Joseph points out, there’s been a (reasonably) clear winner and loser in all six prior instances. In reverse chronological order:

Young’s been everywhere since this trade and Bennett never worked out. But Wiggins is a star in the making in Minnesota, which at least helps soften the blow of losing Love. Though Love’s failed to put up the same level of numbers in Cleveland that he had in Minnesota, he’s been a key part of three straight NBA Finals teams for the Cavs (and obviously won it with them in 2016). The Wolves still haven’t made it to the playoffs with Wiggins & Co., so clear advantage to Cleveland.

Hardaway would team up with Shaquille O’Neal to bring Orlando to the NBA Finals just two years later, so again, automatic advantage to the Magic before considering the rest of this bad deal. Webber never panned out for the Dubs, and was traded to Washington in year two. The picks would net the Magic Mike Miller, most importantly. But the conference title weighs far more here.

76ers send No. 1 pick to Cavaliers for Roy Hinson

The Cavs ended up drafting Brad Daugherty, who averaged 19 points per game over the course of eight seasons, while leading Cleveland to the playoffs four times. Hinson lasted just a season and a half in Philadelphia, and retired by 1991.

Celtics send No. 1 pick, No. 13 pick to Warriors for No. 3 pick and Robert Parish

Golden State drafted Joe Barry Carroll and Rickey Brown in those two spots, respectively, though neither really turned into much in the NBA. Both players spent time competing in Italy, and Carroll was actually All-Rookie in 1981 and an all-star in 1987. That’s nothing compared to what Boston got out of the deal, however. Parish had all of his best years in Boston, winning three titles with the team. He’d eventually be inducted into the Basketball Hall of Fame. But he was helped along the way by the player drafted by the Celtics at No. 3, Kevin McHale. The power forward teamed with Parish and Larry Bird to win those three titles, play for several more and all get inducted into the Hall of Fame.

Hundley wasn’t a stellar NBA player for the Lakers, but he was serviceable (though far from the level of production you’d expect from a No. 1 overall pick). In Cincinnati, Lovellette’s best season came the year after he was traded to the Royals, though he’d head to the St. Louis Hawks after that. Paxson played just a couple seasons after the trade. Lovellette’s the best player involved, but didn’t spend enough time with the Royals to really make them a clear winner here.

Share was drafted in 1950, but didn’t play for Boston at all that season, and was traded to the Pistons before the 1951 season. In exchange, the Celtics received Sharman, who was a two-time Hall of Famer and eventually the architect of the 1980s Lakers championship teams. Share, on the other hand, averaged a little over eight points per game in a nine-year career.

Will this year’s deal end up as lopsided as many of these others? Right now, the trade appears pretty even. But as these past trades all show, a lot can change over the course of players’ long or short careers.