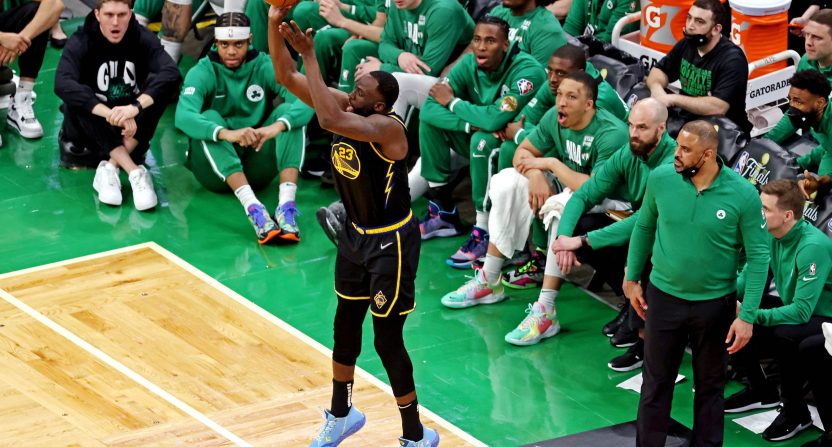 It has been a tough first three games of the NBA Finals for Draymond Green. He’s still elite on defense, but has had a negligible offensive impact for the Warriors, to the point that he has been a liability. Green has as many points (15) as he does personal fouls and has made only five of his 19 field goal attempts.

Green admitted that he played “like sh—” after Game 3. His fatal flaw as a player, his struggle to put the ball in the basket, is rearing its head, and has proven detrimental throughout these playoffs. Green is incapable of making a semi-difficult shot from anywhere on the court and relies completely on making passes in transition and setting hard screens for Stephen Curry.

The Celtics have done a great job of taking away Green’s main offensive options. For one, they employ a switching defense with no weak link, which makes it hard for Green to orchestrate on the perimeter. Boston is talented enough to navigate screens and make the required quick decisions to deal with the Warriors’ flow of dribble handoffs, and they rarely make the mistakes that teams usually make against the Warriors, such as conceding easy back-cuts to the rim or missing switches. Without those dribble handoffs, Green loses his impact as a perimeter hub.

Boston has also played drop coverage for many of the pick-and-rolls involving Curry and a big man. That is, of course, a risky decision, as it gives Curry room to shoot threes. Curry has punished that over and over again but the key is that the only thing that drop coverage gives up is a pull-up three pointer. As stupid as it might look when Curry nails a three, playing drop coverage avoids the complications that come when you sell out to stop Curry.

The Celtics have yet to double-team Curry, which means Green has never had his usual chance to receive the ball in space and pick out a pass in a four-on-three situation. Green hasn’t been able to get anything going as a roller in the pick-and-roll; that’s never been his forte, and his finishing ability is simply not up to par.

The result, despite Curry’s hot streaks, is that the Celtics have done an excellent job of slowing down the Warriors’ offense. For the series, Golden State has an offensive rating of 110.5, which is six points lower than their efficiency before the Finals.

In Game 3, Ime Udoka made it a point to take advantage of Green’s inactivity on offense. The Celtics put Marcus Smart on Green for much of the game, with Derrick White guarding Curry. While Smart is on-paper a perfect Curry defender, he’s also a perfect Draymond defender, because Smart can switch onto any player at any time, and he’s a brilliant help defender.

Smart was able to direct the defense while guarding Green in a way that he couldn’t while chasing Curry. He could see when screens were coming, and make split-second communications to his teammates deciding whether or not to switch. Any Curry-Draymond pick-and-roll was snuffed out instantly by Smart’s activity, as he has no problem making an aggressive switch onto Curry. And when Smart can do that, Green can’t flatten Smart with his bruising screens.

Smart would guard multiple players in one possession, taking care of all threats:

He started that possession guarding Green, by the way.

Defending Draymond means that you can rove free away from him, because Green is unlikely to punish inattention. It’s important, though, to be careful about when you roam. Green will pivot into a dribble handoff for a shooter if you give him room at the right time. The Celtics are so quick and smart that they can rotate in time to shut that down.

Sometimes, there is no reason to pay any attention to Draymond. Watch Smart completely ignore him to barricade the rim against Curry:

Green is not doing anything at the top of the screen. Smart knows it and takes away Curry’s chance to make a floater or dish the ball under the basket. Klay Thompson gets a look from three only because Jaylen Brown was a little over-anxious in helping from the corner.

This kind of thing happened a lot in Game 3. Adding help defenders to the middle of the court helps keep the Warriors out of the paint and limits easy kickouts, as the players defending Thompson and Andrew Wiggins can stick to their man. Watch Grant Williams make this layup a circus shot for Curry:

Curry, being Curry, still makes it. But that’s a tough look.

Early in the fourth quarter, when the Celtics made a run that won them the game, Jayson Tatum helped force a turnover by ranging away from Green:

The court is simply too crowded for Curry. The Celtics ended up using their two-big lineup (with both Robert Williams III and Al Horford) for that fourth quarter run, and it worked because they were able to shrink the court for Curry. Williams, like in the above clip, was excellent defending screens.

Most of all, the Celtics were aggressive only when the situation allowed. They didn’t upend their defense to stop Curry. They used a Warriors weak link (Draymond’s lack of scoring) to disrupt the right areas of the court. Their in-sync defense already takes away the Warriors’ usual approach.

Green will have to be better individually. The Warriors can be more creative about running around him when he has the ball at the top of the key. He can do damage when he receives kickout passes by getting Thompson or Jordan Poole a shot, so the Warriors can space the floor in a way that makes that easier.

Sometimes, Green could stand in the dunker spot as a finisher, with the rest of the floor spaced out. They’ll need him to make his layups.

The puzzle for Steve Kerr and Golden State is keeping both shooting and defense on the floor. The Celtics will relish the minutes when Green plays with a non-shooting wing player like Gary Payton II or Andre Iguodala. That’s why Otto Porter Jr. took most of Iguodala’s minutes in Game 3. Golden State’s spacing is already suffering.

The Warriors can also keep attacking drop coverage and dare the Celtics to give Curry all those open threes. If Green is the screener, they can have him roll and try to generate a passing sequence from there.

More than anything, the Warriors need to get the ball moving. The Celtics have done a great job of preventing that. Activating Green will be key as Golden State tries to avoid a 3-1 deficit.