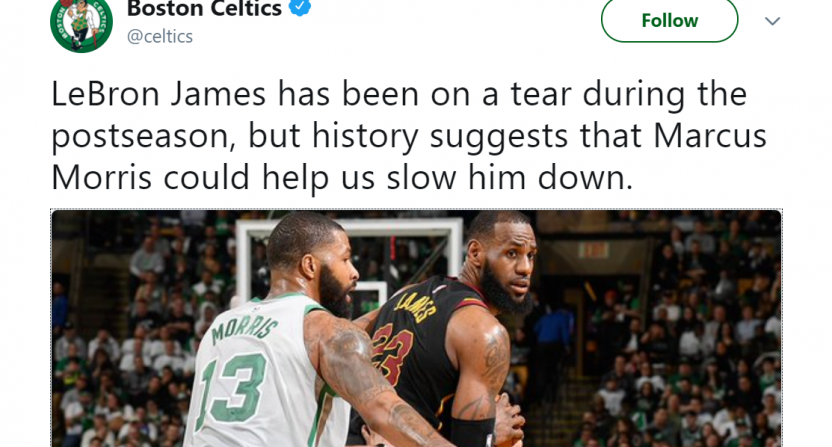 Update: Marcus Morris has been talking.

Marcus Morris on the chance to defend LeBron James in playoffs after getting a taste a couple years ago in Detroit: "I’m a little older, a little more experienced. Personally, I think I’m probably the best guy defending him in the league, outside of Kawhi."

Hey, remember when a lot of the pre-semifinal conversation centered around the impending matchup between Raptors rookie forward O.G. Anunoby and Cavaliers veteran/best player in the world/probably ever forward LeBron James?

No? Well, that’s not surprising, given the Cavs beat the Raptors so badly Toronto fired Dwane Casey, who’s likely going to rack up multiple coach of the year awards.

But they were definitely there. Here’s one from The Ringer:

With OG Anunoby and Pascal Siakam, Toronto may be better equipped than ever to defend the King. But can the two inexperienced forwards hold their own against the greatest player on earth? The answer could determine the series victor.

The Toronto Raptors’ hopes of containing LeBron James rest primarily with their 20-year-old non-lottery rookie — and that could actually be a good thing for Toronto.

Lol. This isn’t a knock on Anunoby; he’s a great defender, especially for a rookie. But LeBron is LeBron. He tore up the Pacers in the first round despite admirable defense from the Bojan Bogdanovic/Lance Stephenson combination.

The Celtics, though, decided on a different approach:

LeBron James has been on a tear during the postseason, but history suggests that Marcus Morris could help us slow him down. https://t.co/PKSUVQ9HMD

Oof. Yes, if there’s one thing I think of when I think of Marcus Morris, it’s “on even footing with LeBron.” The article itself isn’t bad, and it cites some interesting details:

During his last 11 regular season and playoff games against a Morris team, James has averaged 21.1 points per game while shooting just 16.3 percent from 3-point range. Even more remarkable is the fact that James did not reach 30 points during any of those matchups, which is a feat he seemingly accomplishes every game nowadays.

Could it simply be a coincidence? The numbers suggest otherwise.

Morris’ success against James continued into the 2016 postseason, as he helped the Detroit Pistons limit the All-NBA forward to just 22.8 PPG during the first round – his lowest scoring average in a series since the 2011 NBA Finals.

But here’s the thing: none of that really matters. It’s an incredibly small sample, and this Cavs team is different, with LeBron playing at the top of his offensive game. He’s going to hammer Boston on the offensive end, and having a tweet like this can’t help Boston, social media blackout or not. And when he inevitably does, probably including a few humiliating moments tormenting Morris, this tweet is going to go all over the place.

There’s no such thing as a LeBron stopper (and if you’re going to pick a member of the Celtics most likely to help slow LeBron, it’s Brad Stevens, not Marcus Morris.)

The sooner everyone realizes this, the better off we’ll be.