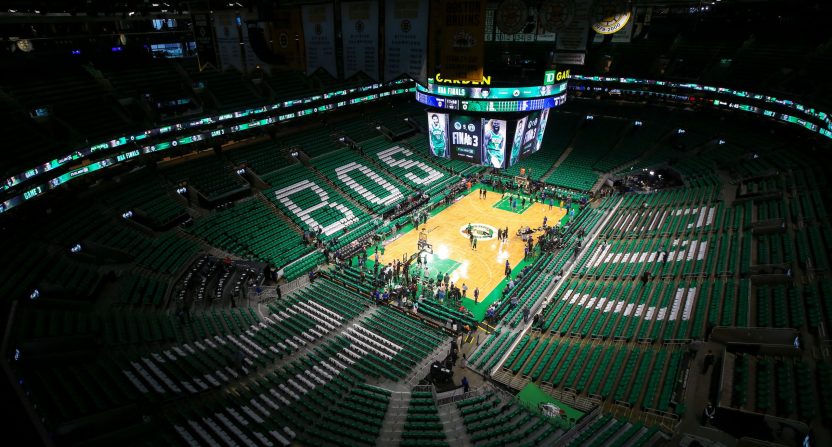 The buildup to Game 3 of the NBA Finals had an unusual controversy involving — of all things — one of the baskets.

A basketball hoop is 10 feet high. As we learned in Hoosiers, that’s the case in small high school gyms, massive arenas, and all points in between. Only, that wasn’t the case in Boston on Wednesday ahead of Game 3.

Kendra Andrews of ESPN reported that roughly 90 minutes before the opening tip, a coach for the Golden State Warriors noticed that the rim Golden State was warming up on seemed a little too high. Some players confirmed that feeling. So, it was measured and sure enough, the rim was two inches too high.

With a little over 90 minutes to tip off one of the Warriors assistant coaches noticed that the rim seemed too high in early warmups. He brought a couple players out to confirm and they also believed the rim was too high. They measured and in fact the rim was 2 inches too high.

There were some different feelings on this one. One was confusion about how something like this can happen during an NBA Finals — let alone an NBA Finals game.

This happened in the NBA. How does this happen in the NBA? https://t.co/ly0UDcwWJf

Genuinely curious how often, if ever, this happens in the NBA https://t.co/Qkg9S9lWEV

They had to fix one of the rims after a Warriors assistant thought it looked too high. It was 2 inches too high. How does that happen in the #NBAFinals ? pic.twitter.com/YZKy06EHyn

Dubs’ warmups had to be paused because the hoop was too high 😳 pic.twitter.com/UgMkAB4EwE

Other fans had a theory, noting the home team is the Boston Celtics and there’s a tendency for things like this to occur to opponents of Boston teams during big events.

This behavior is to be expected from Boston. https://t.co/hEqwPWKZuw

I hope this was an intentional act by the Celts done in memory of Red Auerbach, who turned the heat up on the Lakers in their locker room.
Love stuff like this – Al Davis accused the Steelers of icing the field outside the hashes to slow down Cliff Branch in the '75 title game. https://t.co/9xNqSdOvlD

Regardless of who set the hoop and whether it was devious or an honest mistake, it certainly is unusual.

Fortunately, the mistake was caught. Now, the game would not have gone off with the hoop set at the wrong height. The NBA checks that before every game. But if a team spent most of its shootaround shooting at a hoop that’s 10 feet and two inches high, it might have a hard time adjusting to one that’s only 10 feet. Given the incredibly precise nature of shots, two inches could be a massive difference.