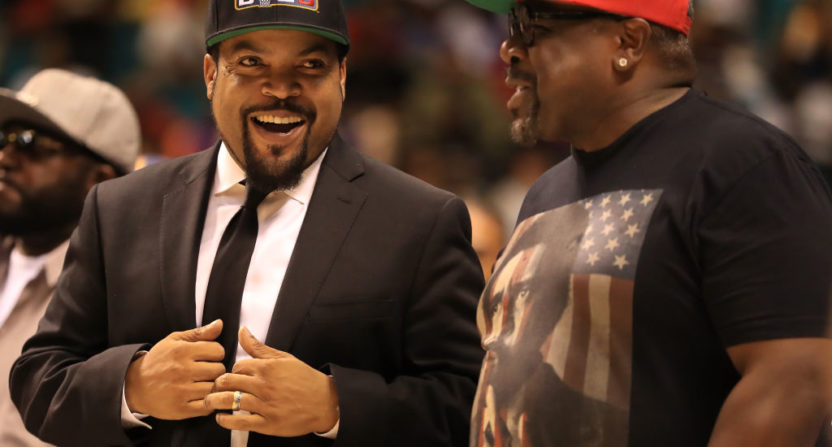 It hasn’t been an easy road for the Champions Basketball League so far. Attempting to capitalize on the growing trend of high-profile summer basketball tournaments, the 16-team league was supposed to launch in July. Featuring former NBA stars such as Shawn Marion, Al Harrington, and Kenyon Martin across its rosters, the league even gave fans the opportunity to buy shares in those teams and become “owners.”

The league was beset with issues and delays from the get-go. The July launch never got off the ground. 16 teams became 10 teams. The first CBL game, a match-up between the Gotham Ballers and L.A. Superstars, was set to be played on August 23 in Nassau Coliseum but was canceled the night before. In an email to team investors, League CEO Carl George called out “third parties” who had “acted improperly” as the reason things were going so poorly. He also threatened that a lawsuit was coming.

That lawsuit was dropped last Friday and the apparent culprit behind the CBL’s troubles was revealed as none other than Ice Cube. Well, the Big3, the professional 3-on-3 venture backed by the rap star-turned-actor-turned basketball league founder.

The $250 million lawsuit accuses Ice Cube (a.k.a. O’Shea Jackson) of poaching ideas and superstar players from the CBL for his rival venture. George accuses Cube and fellow Big3’s co-founder Jeff Kwatinetz with cozying up to CBL executives and players before stealing their internal information and swaying players to switch allegiances for the Big3’s 2014 launch. The two leagues had apparently partnered up in order to create a mutually-beneficial business to one-day rival the NBA, according to George.

CBL players did not sign exclusive contracts when they agreed to play in the league. The problem, according to George, is that Big3 contracts specifically forbade them from playing in leagues such as the CBL.

In July of 2017, the CBL began notifying its players that the league was going to commence and to be prepared to play as required under the CBL player contracts.

To CBL’s surprise, players slated to participate in the CBL’s inaugural game on August 23, 2017 informed the CBL that they would be unable to participate due to threats made by the BIG3. Specifically, such players indicated that the BIG3 had asserted that the player agreements prohibited participation in the CBL league for the August 23 game and that any player participating in with the CBL would be found in violation of the BIG3 contract and rules and subsequently significantly fined and/or kicked out of the BIG3.

Several players who were playing for the BIG3 and who also had existing contracts with the CBL told the CBL that they were told when they signed with the Big3 initially that the BIG3 only restricted participation in other 3 on 3 basketball events. Such players also indicated their belief that their contracts do not actually restrict them from playing in the CBL but that the threat from the Big3 could cost them their position and their participation in the 52% of revenues promised by the Big3 as a season ending bonus pool.

The BIG3 didn’t exactly set the world on fire itself this summer. It’s perhaps best known for the fiasco that occurred in Philadelphia when Allen Iverson failed to deliver on promises to play in front of a packed house of fans. In fact, he did it multiple times before the league suspended him.

No word yet on what will come of the lawsuit, but chances are we won’t be seeing the Gotham Ballers, L.A. Superstars, or any other CBL teams in action anytime soon.