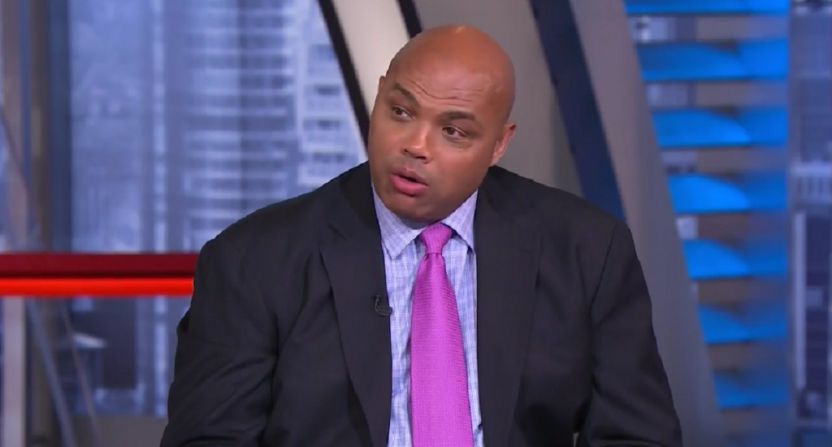 Now we’ve heard from TNT analyst Charles Barkley and he thinks Irving is just plain stupid for wanting to leave the best player in the world:

“When he was on a bad team and he was the man, I guarantee you that wasn’t a lot of fun for him. And now you want to leave the best player in the world. And listen, I hear all of this stuff about how LeBron casts a big shadow. He should cast a big shadow. I’m pretty sure everybody that played with Michael Jordan or Larry Bird or Shaq — it’s a big thing. If you get a chance to play with great players, that’s half the battle.”

After playing with Julius Erving and Moses Malone early in his career, Barkley was “the man” with the Philadelphia 76ers and Phoenix Suns for a decade but famously never won a title. Later in his career, he went title-chasing with the Houston Rockets, playing second fiddle to Hakeem Olajuwon and Clyde Drexler. We all know Barkley has a tendency to run his mouth but these are strong words coming from him nonetheless.

Irving was Cleveland’s star for three years before James’ return from his own title-chasing stint in Miami. Granted he was a younger and less developed player then, and the Cavs never won more than 33 games. Also, if he lands at one of his preferred destinations — San Antonio, New York, Minnesota or Miami — he will have a far better supporting cast than he ever had as a solo star for the Cavs.

But even so, the Cavs have reached three straight NBA Finals and won one during his time there, and they’re favored to return to the Finals next year assuming Irving stays.

Kyrie’s desire to leave a championship contender caught the eye of someone else in the NBA on Wednesday. Here’s a tweet from Jazz center Rudy Gobert that possibly subtweeted Irving and his desire to get out of LeBron’s shadow.

People care more about attention than about winning nowadays…

Of course, that tweet could be about no one in particular. Some folks in the Twitterverse have interpreted as a shot at Gobert’s former teammate Gordon Hayward, who left the Jazz for the Celtics this offseason. But that wouldn’t fit as well considering Hayward left for a team with a far better chance at winning a title. So if Gobert subtweeted a specific player, Irving seems like the most likely subject.

This has been a tumultuous week for Kyrie. Following Harper’s comments on Monday, LeBron appeared to take a veiled shot at Irving as well.

Never let another ride your wave ?!!!

At least former Cavs general manager David Griffin has Irving’s back, calling the decision to demand a trade courageous on ESPN’s The Jump.