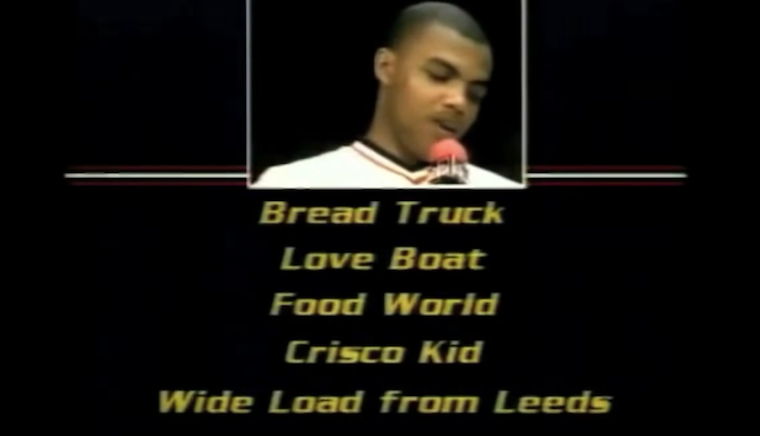 With the NBA All-Star Game in Los Angeles this weekend and Jimmy Kimmel Live part of the Disney-ABC family, NBA stars are stopping by the late-night talk show. Wednesday night, it was TNT analyst and NBA Hall of Famer Charles Barkley chatting with Kimmel.

As you might expect with someone as entertaining and talkative as Barkley on the show, he was on with Kimmel for multiple segments. But early on in the interview, Barkley shared a story about nearly being traded to the Lakers. He thought the deal was done and celebrated with his friends by getting drunk.

Then the Sixers pulled out of the deal — and Barkley had to play that night after getting tanked. “I don’t remember anything about that game,” Barkley said. “I was blasted. I’m not gonna life.”

Kimmel had plenty more to ask, such as whether or not Barkley ate a pizza during a game in college and whether or not he bet on the Super Bowl. But after coming back from a commercial break, Kimmel played an old clip of Barkley in college reading off the many nicknames he was given.

Most fans will remember “Sir Charles” and “The Round Mound of Rebound,” but there are several other entertaining ones that have been lost to time. “Crisco Kid”? “Wide Load from Leeds”? Those are just a couple, as you can see here:

A Google search says that “Love Boat” was a rather well-known nickname for Barkley, but seems to have been forgotten. Do we want to know how he earned that one? Is it a reference to his size and lovable personality? Because “Love Boat” has taken on different connotations in sports since Barkley was a star at Auburn.

The video above also includes Barkley reminiscing about not wanting to be drafted by the Philadelphia 76ers. Team owner Harold Katz told Barkley that he would have to lose weight for the Sixers to select him. Barkley says he weighed around 292 pounds at the time and the team wanted him to get to 285.

After his agent told him that Philadelphia could only offer a one-year, $75,000 contract because of a hard salary cap, Barkley did all he could to prevent the Sixers from drafting him. (“I didn’t leave college for $75,000,” he told Kimmel.) To be more specific, he tried to make sure he couldn’t make Katz’s weight limit by going on a three-day eating binge of Denny’s, fast food, and steak. As a result, Barkley gained 15 pounds before meeting the Sixers before the draft.

Despite that, Philadelphia selected Barkley and he played with the Sixers for eight of his 16 NBA seasons, laying the foundation for his Hall of Fame career and giving him plenty of stories for broadcasting.