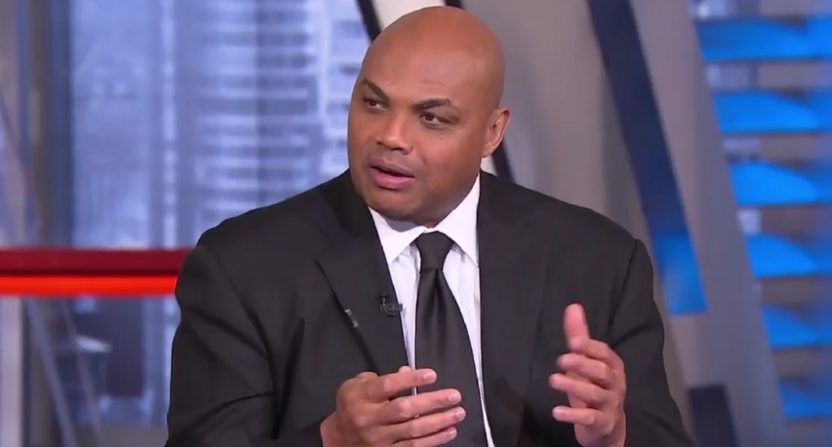 Monday night’s NBA on TNT telecast was the Washington Wizards-Detroit Pistons game, which seemed like a bit of a curious choice. The Wizards had already clinched the Southeast Division, so maybe this was an opportunity for some viewers to get a look at a team that could give the Cleveland Cavaliers a run in the Eastern Conference playoffs. Meanwhile, the Pistons were finishing off a horribly disappointing season in which they’ll finish under .500 (with 38 wins, at best).

However, the setting was the reason for TNT’s broadcast. Monday’s game was the final game at the Palace of Auburn Hills, the Pistons’ home for the past 29 seasons. The team brought in several former players, including many from the three teams that won NBA championships in that arena, such as Isiah Thomas, Chauncey Billups, Dennis Rodman, Richard Hamilton and Ben Wallace. That was the highlight for the home crowd, who watched the current Pistons team fall behind 55-42 at the half.

For viewers at home, the halftime entertainment was TNT’s studio show. With the game broadcast from the Palace, Charles Barkley shared an interesting tidbit with the Inside the NBA crew and the viewing audience. Barkley claimed he’d never been to Detroit.

And Chuck is already spitting out interesting facts… pic.twitter.com/MXHEPenpYK

While that’s a curious claim from someone who played 16 NBA seasons, and thus played the Pistons in their home arena at least twice a season, it’s not an outlandish claim. As Barkley said, it’s pretty interesting. But is it a fact?

Charles Barkley reveals on the TNT halftime report he has never been to Detroit. Only played in Auburn Hills.

During his career, the Pistons never actually played in the city of Detroit. When Barkley entered the NBA in 1984, the Pistons played their home games at the Pontiac Silverdome. During his rookie season (1984-85), the Pistons did have to play 15 home games in Detroit at Joe Louis Arena when the roof of the Silverdome collapsed due to heavy snow. But Barkley’s Philadelphia 76ers didn’t visit the Joe during that span, which included the playoffs. The Pistons moved to the Palace for the 1988-89 season, which means Barkley never played in Detroit during his final 12 seasons.

But Barkley didn’t claim he’d never played in Detroit; he said he’d never been to Detroit. Auburn Hills is 34 miles away from Detroit, so it’s possible he didn’t go to the city whenever visiting with the Sixers, Phoenix Suns or Houston Rockets. Detroit Metro Airport is located in Romulus, 24 miles outside the city (and 51 miles away from Auburn Hills). But private or chartered flights probably flew into Oakland County airport (12 miles away) or even Flint (38 miles). Is it any wonder the Pistons wanted to move back to Detroit, closer to their fanbase?

As Barkley made his claim during the TNT halftime show, Shaquille O’Neal pointed out that Detroit has several casinos, which was a devious shot at Barkley’s well-known gambling problem. (For anyone wondering if Barkley could have been in Detroit for TV, Ford Field hosted the 2009 Final Four. But Turner didn’t pair up with CBS on NCAA Tournament coverage until 2011.)

However, at least one person disputed Barkley’s claim after he made it. Sports talk radio personality Michael Stone, who now co-hosts the morning show on Detroit’s 97.1 FM, says he and a colleague hung out with Barkley in the city during the 1990s.

Hey @NBAonTNT Barkley is wrong.He has been in Detroit. He met myself and @VanEarlWright at a strip club on 8 mile in the 90's.Great time

Stone has been in Detroit since the 1980s, first working as a TV producer before becoming Mitch Albom’s radio sidekick. When Detroit got its first sports talk radio station, WDFN, in 1994, Stone had established himself as enough of a personality that he hosted the afternoon drive-time show. Van Earl Wright hosted the station’s midday program when it first went on the air. (The two also worked together at Detroit’s NBC affiliate, WDIV.) Not that any of that has anything to do with why they would be hanging out at a strip club where they met up with Barkley, who was friends with Wright.

Why wouldn’t Stone have mentioned the club where he met Barkley? 8 Mile is densely populated with strip clubs. There are a number of adult establishments where they could have bumped into each other. For those claiming that Stone broke some kind of man club rule, the sheer number of strip clubs on 8 Mile gives Barkley some plausible deniability. He can’t tell you where it was. Actually, Stone did name the club in a response to that original tweet.

.@stoney16 says Charles Barkley is lying about having never been to Detroit. Says they went to a gentleman's club in the city.

But hey, maybe Barkley doesn’t remember that random night in the 1990s. Let’s be fair. According to Stone, it was more than 20 years ago. (Wright worked WDIV from 1993 to 1996, so him being in the picture means Barkley was playing with the Suns at the time.) Barkley may not have even realized he was in Detroit at that establishment. The stretch of strip clubs on 8 Mile is about 15 miles north of downtown.

With the Pistons moving back to Detroit, sharing the downtown Little Caesars Arena with the Red Wings beginning next season, maybe Barkley can visit in the near future for a trip he’ll remember and realizes is in the city. The Pistons might have to warrant some national television attention and return to the playoffs — preferably a conference final — for TNT to bring its studio show to Detroit. Perhaps the team can invite Barkley for a visit to the new digs before then. And maybe he and Stone can reunite for a fun evening on 8 Mile afterwards.