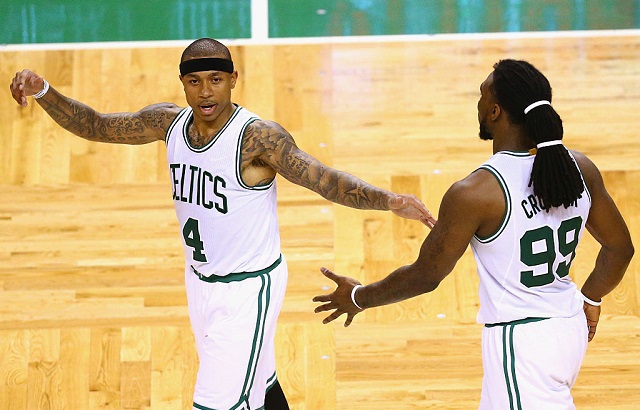 Just 41 days ago, fans of the Boston Celtics were in a crazed, frenzied panic. It was draft night, and Boston had a yachtload of assets to potentially deal, most notably the third overall pick acquired from Brooklyn in the well-chronicled Kevin Garnett-Paul Pierce trade.

The rumors and tweets intensified as the Celtics’ pick approached. Looking to accelerate a rebuild undertaken by general manager Danny Ainge and head coach Brad Stevens, they were reportedly trying to trade for Chicago’s Jimmy Butler, Philadelphia’s Jahlil Okafor or a whole host of other young stars, depending on what you read.

Much to the dismay of Celtics fans, and the Twitterverse, Boston kept its pick and surprisingly selected Cal’s Jaylen Brown over Providence point guard Kris Dunn, along with international big men Guerschon Yabusele and Ante Zizic. At the draft, they punted on their quick rebuild and regrouped for free agency, hoping to lure a star or two on max contracts — they tried luring Kevin Durant to Boston with the help of Tom Brady — while keeping the option of parlaying their cache of young talent into another star via trade.

With Horford and the athletic, versatile Gerald Green added to a young roster that narrowly lost a first-round series to the aforementioned Hawks, Boston has the ability to leapfrog Toronto to win the Atlantic Division and emerge as the second-best team in the East behind the defending champion Cavaliers. ESPN’s Summer Forecast series tabbed Boston as the fifth-most likely team to win a championship next season.

“The thing that Al can do beyond just the numbers you can see or the shooting percentages,” Stevens said on Chris Mannix’s Vertical podcast this week, “he can play with every big on our roster. He complements everybody.”

Though of course he’ll do a lot for Boston beyond the percentages, Horford will help the Celtics from three-point range, after finishing 28th in the league in that department last season. Horford’s 3-point field goal percentage last season, 34.4, wasn’t even a percentage point better than Boston’s team average of 33.5, but he progressed from long range as the season went on.

After a rough December, Horford’s attempts and percentages increased with every month. Following a rocky final six regular season games in April, Horford reiterated to Atlanta’s playoff opponents— notably including the Celtics, who fell to the Hawks in last year’s first round— that he can be a 3-point shooting factor.

Toronto, Boston’s main competition in the Atlantic Division, took Cleveland to six games in the Eastern Conference Finals, but will mainly return the same team as last year after using a majority of its cap room to max out DeMar DeRozan. Bismack Biyombo went south to Orlando for $72 million and will be replaced by former Celtic Jared Sullinger and ninth overall pick Jakob Poeltl from the University of Utah.

Boston’s other competition for that second spot includes Atlanta, Indiana and Detroit. The Hawks gave Kent Bazemore $70 million over four years to return to the ATL and underwent an interesting makeover by giving Dwight Howard $70 million over three years following the trade of longtime point guard Jeff Teague to the Pacers, giving the primary ball-handling duties to the promising 22-year-old German Dennis Schoder, who will be backed up by veteran addition — and Georgia Tech product — Jarrett Jack.

Indiana canned head coach Frank Vogel despite a 45-win season — replaced by former Portland head coach Nate McMillan—  as it looked to bring a faster-paced offense in, and Larry Bird proceeded to acquire Teague from the Hawks in a three-way-trade that sent George Hill to Utah, along with forward Thaddeus Young in a separate deal with Brooklyn. Young will be part of a new, intriguing frontcourt rotation built around 20-year-old budding star Myles Turner. Veteran Al Jefferson came over from Charlotte and Ian Mahinmi (Washington), Solomon Hill (New Orleans) and Jordan Hill (Minnesota) all left in free agency.

Stan Van Gundy has quickly revitalized the Detroit Pistons’ roster, and his work continued over the offseason with the additions of Jon Leuer (38.2 percent from three) from Phoenix, gigantic human being Boban Marjanovic from San Antonio and first-round pick Henry Ellenson out of Marquette. As of now, it seems like one of the group of Boston, Atlanta, Indiana and Detroit will challenge Toronto for second in the East and the Celtics have as good a shot as any of them.

One problem Stevens will have with these Celtics, and it’s a good problem to have, is how he’ll configure his rotation amongst the wealth of young talent on this Boston roster. Horford will replace Sullinger in the starting lineup, but there will be heavy competition to replace the 28 minutes per game Evan Turner — gone on a $70 million free agent deal with Portland — provided. Newcomers Green and Brown will be joined by incumbents Marcus Smart, Kelly Olynyk, Jonas Jerebko, Tyler Zeller, R.J. Hunter, Terry Rozier and James Young vying for playing time.

If Stevens can find the right combination of players, it’s certainly possible that we can see Boston in next year’s conference finals.

“The stability and the continuity has provided a real sense of progress that you feel like is being recognized around the league,” Stevens told Mannix. “When a guy like Al decided to come, you feel like you’re moving in that direction that you’re talking about moving in. That was the validating part of it.”

With the option to swap first-round picks next year with Brooklyn and the ownership of the Nets’ unprotected 2018 first-rounder, the future will only get brighter for the Celtics going forward. And the signing of Horford signified that Boston is slowly shifting from asset accumulator to title contender.