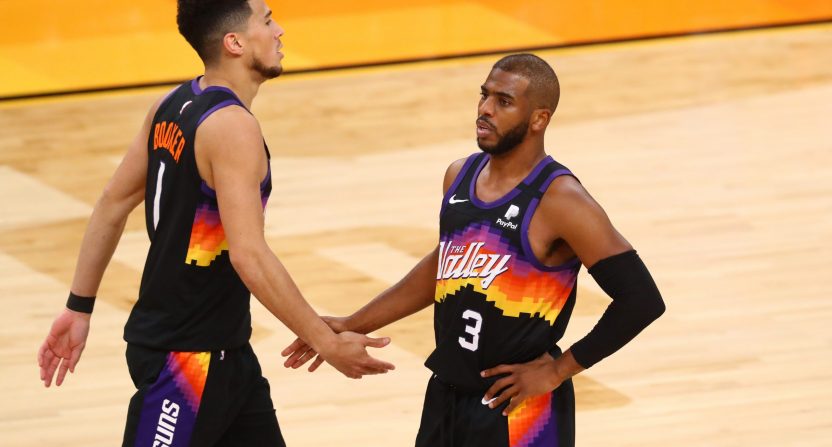 If the 2019-20 Oklahoma City Thunder taught us anything, it’s that Chris Paul knows how to win games. He guided a directionless team on the verge of a rebuild to a solid playoff spot in the Western Conference, and took James Harden’s Houston Rockets to seven games in the first round. Dennis Schroder and Shai Gilgeous-Alexander, empowered by Paul’s steady hand, had career seasons.

The Suns have had the same experience this season. They’re second in the West after missing the playoffs last year. Other factors go into that, but Paul deserves a good bit of credit for helping Devin Booker play relevant basketball in Phoenix. Remember when big-name NBA voices were calling for Booker to ditch Arizona? Paul has ended that discussion for the time being.

Booker had been the classic “lots of points, bad team” player for most of his career, but with a more competent team around him and an all-time great point guard, he’s legitimately driving winning.

It’s Paul, though, who made the All-Star team on the first try (Booker will be an injury replacement). They have both played All-Star basketball, and the Suns’ recent success (8-2 in their last 10) backs that up.

Paul has taken the full Point God role in a way we haven’t seen since Lob City. After averaging 6.7 assists last year, a product of the Thunder’s guard depth, he’s back up to 9.0 this season, and that’s with a recent run of purely expert playmaking: in his last four games, he has a total of 53 points and 50 assists.

His field goal attempts per game are about what they have been the past three years. It’s the playmaking that has expanded as he takes on a role that wasn’t as necessary next to Harden in Houston and the guards in OKC. He runs OKC’s offense and helps generate looks for Booker.

Paul’s finger is on the pulse of every game. As he’s always done, he slows the pace and looks to get his teammates shots. The stability he brings is a big key to his impact — the offense is always healthy when he’s on the court, and you can always trust that he will get his mid-range looks and hit a steady diet of three-pointers.

The Suns’ big men, a big plus this season, have obviously benefited from playing with the Point God. Watch how he generates this open three for backup center and reliable stretch five Dario Saric:

No player in the NBA has quite mastered the art of locking a defender on his back like CP3. When he comes off a screen, he knows guards will pressure him from the back to try to trap him and dissuade the pull-up. He is an expert at keeping them there, using that predictability to his advantage, and taking the play that opens up.

On that assist to Saric, he waited for the moment he felt Alex Caruso make contact, then flipped that behind-the-back pass. He’s daring the Lakers to either have Damian Jones race back to Saric or initiate a whirlwind of rotations.

Conversely, if the pick-and-pop or alley-oop isn’t open, Paul will simply force you to foul him. He’s one of the great purveyors of the non-shooting foul (along with Kyle Lowry and Trae Young), and it’s not great basketball. But it puts teams in the bonus early, which happened to the Lakers, and it gets the Suns easy points.

It doesn’t feel like a coincidence that the Suns have also seen some positive internal growth that has helped them ascend to second in the varsity conference. Most notably, Mikal Bridges has taken a clear leap as a three-point shooter (up to 42 percent!) and a wing stopper — he’s a guy you trust to reliably guard some of the best players in the league. Bridges has also flashed talent as a driver and playmaker.

DeAndre Ayton continues to improve as a rim protector. They get good minutes every night from Cam Johnson and Cameron Payne.

Phoenix can play D. They’re sixth in the league in defensive rating despite Booker still being a minus on that end — although he can only be so much of a minus given the Suns’ success in that area. Paul is remarkably still a plus on defense. Bridges’s emergence as the ideal three-and-D wing has been a major help, as has Ayton’s presence.

It’s not time to think of the Suns in the same conversation as the LA teams and Utah in the Western Conference. That’s a different level that will be difficult for this team to reach. But they’re 23-11, with a good shot at home-court advantage in the playoffs.

Booker’s scoring and Paul’s passing and experience make them a threat to any team they face. As ever, we’ll see CP3 being a thorn in the side of some elite teams in the postseason.