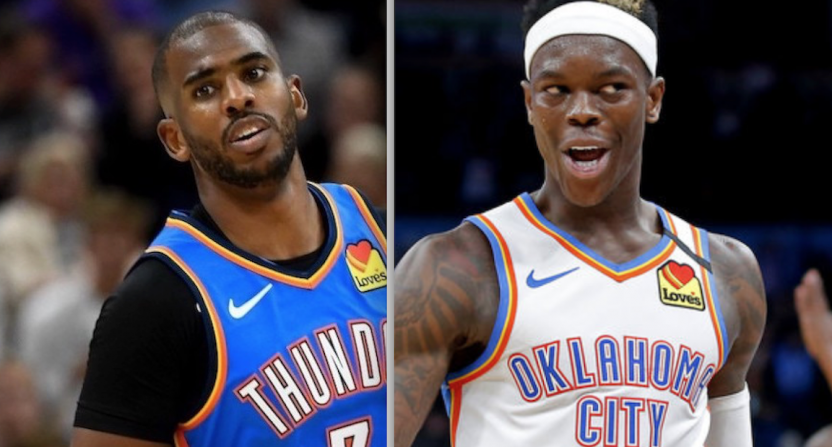 Teams at the top and bottom of the NBA’s Western Conference playoff standings are making big additions at point guard just before the draft and free agency open.

On Sunday, the NBA champion Los Angeles Lakers agreed to a deal with the Oklahoma City Thunder for Dennis Schroder. In exchange, Oklahoma City will receive guard Danny Green and the No. 28 selection in Wednesday’s NBA Draft. Schroder is a considerable upgrade from Rajon Rondo and Avery Bradley, giving the Lakers a viable third scoring option alongside LeBron James and Anthony Davis.

This past season with the Thunder, Schroder averaged 18.9 points and four assists per game, shooting 39 percent from three-point range. Going into his seventh season, Schroder, 27, is on the final year of his contract but the expectation is that the Lakers will sign him to an extension, according to ESPN’s Adrian Wojnarowski.

But Schroder isn’t the only point guard the Thunder is dealing away. Chris Paul will be traded to the Phoenix Suns along with forward Abdel Nader in exchange for guards Ricky Rubio, Ty Jerome, and Jalen Lecque, forward Kelly Oubre Jr., and a 2022 first-round pick.

Why the 2022 first round draft pick matters:

1) There's a major premium on 2021 picks, as NBA teams are anticipating what appears to be an outstanding upcoming class

2) Growing pessimism around the possibility of the age limit being eliminated in time for the 2022 draft. https://t.co/bwh6d2Z7OA

Paul had a resurgent season after being traded to the Thunder as part of the Russell Westbrook deal.

Many viewed the 35-year-old veteran as past his prime after 14 NBA seasons, but he averaged 17.6 points, 6.7 assists, and 1.6 steals while shooting 35 percent on three-pointers. That effort helped Oklahoma City make a surprise run, finishing fifth in the West and taking the Houston Rockets to seven games in a first-round playoff series.

In Phoenix, Paul becomes a strong backcourt mate who can relieve some scoring and ball-handling burden from Devin Booker. The fifth-year guard was one of the breakout stars of the restarted NBA season.

Though the Suns did not make the playoffs, Booker averaged 30.5 points for a team that went 8-0 in the Orlando bubble. Overall, he averaged 26.6 points per game for the 2019-20 season.

According to rumors, the Milwaukee Bucks had strong interest in Paul after being eliminated in the East semifinals by the Miami Heat. Paul would’ve been a steadying presence and far more reliable floor leader than Eric Bledsoe who could take on more of a leadership role from Giannis Antetokounmpo. But Milwaukee couldn’t match the talent, nor the first-round pick, that the Suns could offer in a trade.

After trading Paul and Schroder, the rebuilding project can fully begin in Oklahoma City with new coach Mark Daigneault and a roster built around Shai Gilgeous-Alexander, who had a breakout sophomore season averaging 19 points per game. That is, unless general manager Sam Presti decides to trade his last remaining star for even more draft picks…