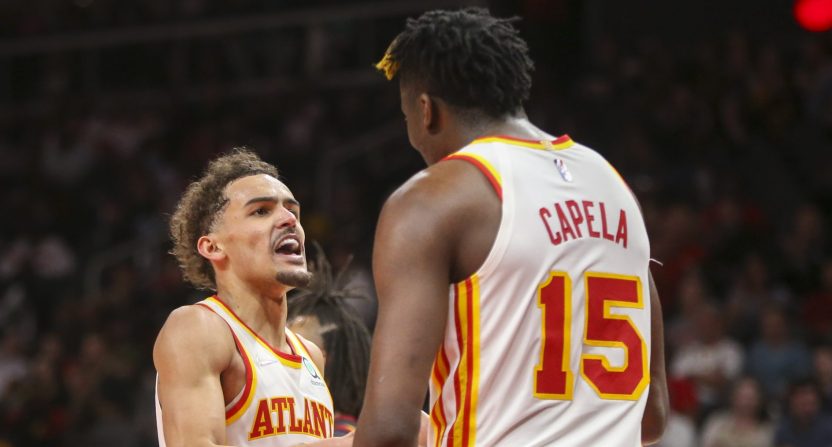 For any sport, the preseason is a time for unbridled optimism where everyone’s championship goals are alive and all teams are undefeated. So when the Atlanta Hawks gave their starters a polaroid photo and asked them to write down their goals for the upcoming NBA season, everyone had extremely was optimistically hoping for an NBA championship – except center Clint Capela.

While every other Hawks player was listing their team goal as winning a championship, Capela was far more realistic than the rest of his teammates, setting his goals as simply reaching the Eastern Conference Finals and earning first-team All-Defense honors.

Gave the guys a Polaroid and had them write down their goal for the season 📸✍️ pic.twitter.com/I2WQaaPfiK

To be fair, those are lofty goals by themselves but compared to the season goals from the rest of his teammates they look a little tame. In any case, the NBA world had plenty to say about his extremely realistic season goals.

The 1st sign of healing is facing reality. These boys are delusional https://t.co/rMPdYW9dFD

At first I thought Clint Capela saying all defense and ECF vs championship was just funny but then when I looked up his contract incentives and realized he gets more for ECF but not for Finals I thought it was HILARIOUS. My man Clint wants to get paid https://t.co/TwxWexLHdE

Capela apparently saw the replies to the Tweet and had a response to the NBA world’s reactions, saying that his prediction was the team’s “worst case scenario.”

I remember they told me worst case scenario!! we all wanna win 💍 come on y’all 🤣🤣 https://t.co/Y1ZiLpHq8q

“I remember they told me worst case scenario!! we all wanna win come on y’all,” Capela said in a Tweet along with a ring emoji.

Though he got roasted for his prediction, there’s a strong chance that Capela is right. The Hawks currently have just the 16th-best odds to win the NBA title this season according to most sports books.