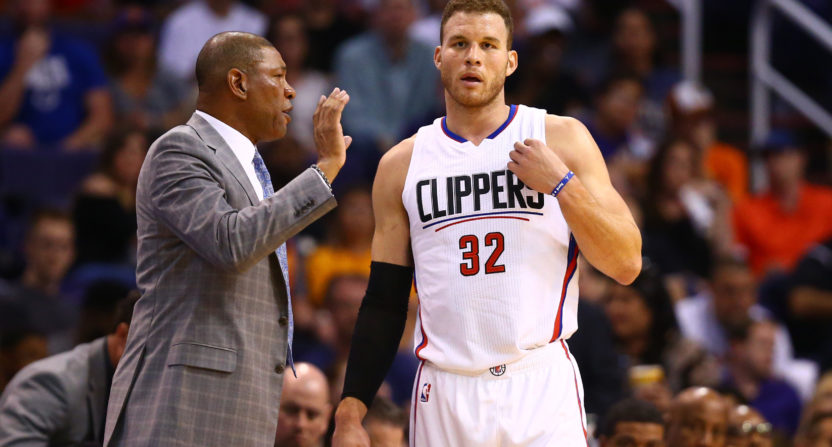 Next time someone tries to tell you athletes should be loyal to the teams they play for, just remind them of what has happened to Blake Griffin over the past six months.

On Monday, the Clippers traded Griffin to the Detroit Pistons in a shocking blockbuster. We’ll have plenty of time to worry about the basketball implications of this move, but for now let’s look back on last summer, when L.A. lured him into a five-year, $173 million contract with promises the front office clearly never intended to keep.

As chronicled by ESPN’s Zach Lowe, the Clippers’ presentation to Griffin on July included an elaborate maze that culminated in a public-address announcement that the team was retiring Griffin’s number, along with a real banner.

When Griffin arrived at Staples Center for his free-agency pitch meeting on July 1, he found the Clippers had erected something of a maze for him with temporary walls. Griffin walked his 3-year-old son, Ford, through the art gallery-style corridors, and found photos hanging at each turn: Griffin on his green Huffy bike with his brother, Taylor, when they were kids; Griffin playing in college; Griffin as a Clipper.

The maze spit Griffin out onto a couch overlooking the Staples Center court, above the lower bowl. Crowd noise pumped in. The team’s public address announcer declared the Clippers were retiring Griffin’s number. Team employees raised an actual banner into the rafters — a vision of the future they wanted.

In Sports Illustrated reporter Lee Jenkins’ telling of the story, the Clippers also hired a choir and announced they were honoring “a lifelong Clipper.”

The Clippers held their free agent meeting with Griffin at Staples. They lowered the lights in the arena and raised his jersey to the rafters as a choir sang. The PA announcer said: "Tonight, we’re honoring a lifelong Clipper."

Ah, man — I TOTALLY forgot the Clippers made these shirts for Blake's FA pitch. We should've seen this coming. pic.twitter.com/C2RPBmoLgI

Even if the Clippers thought they were being genuine when they said those things, they couldn’t have meant “lifelong Clipper” too seriously if they were willing to flip Griffin before the first season of his deal ended.

Surely if we can bash players for failing to show loyalty to franchises that draft them, we can bash teams that discard players only months after promising them lifetime allegiance. Alternately, we could just accept sports leagues as cold-hearted businesses and stop getting so moralistic when players “betray” the suits they work for. Either one works.

Though Griffin is surely a bit jarred by this sudden trade, we know he’s not naive to the way teams can cast aside players. In fact, he explained the dynamic perfectly during a 2016 standup comedy routine in Montreal.

“You put all your heart and soul into this team and then one day, they’re like, ‘Oh no, we’re good. Pack up your shit. You’re going to Nashville,'” he said (in a thinly veiled P.K. Subban reference).

Never forget the all-too-true joke Blake Griffin told about being traded during a stand-up set in 2016… [NSFW] pic.twitter.com/XypJzFmKk3

Seriously, if that is how teams treat players, it’s no wonder how players sometimes treat teams.