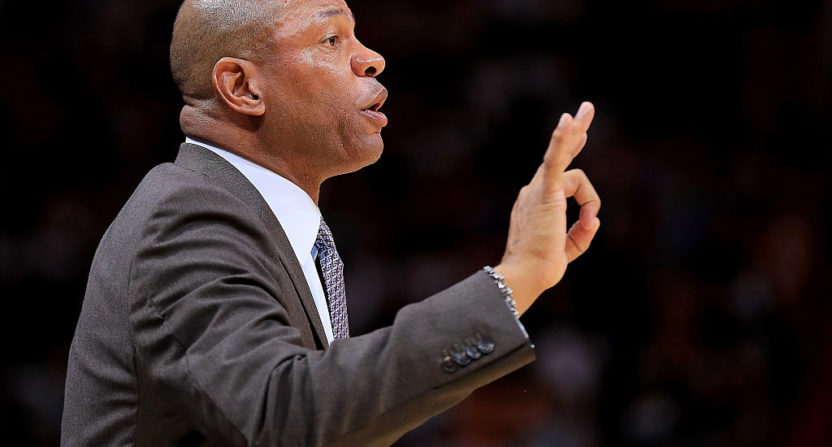 While the last six years have been a Golden Age for the Los Angeles Clippers, that’s really just a relative term. The Clippers still have not gotten over the hump, stalling each season in the conference semifinals or first round. While Doc Rivers brought a championship coaching pedigree to L.A. with him in 2013, he also stepped into a front office role with no formal experience.

And while the Clippers have repeatedly failed to build a legitimate championship contender, many people have wondered if Rivers simultaneously handling coaching and front office duties was holding the franchise back.

Now we’ll find out if removing Rivers from the front office is actually the fix the Clippers need, because that’s exactly what owner Steve Ballmer did Friday, according to ESPN’s Adrian Wojnarowski. Ballmer said he and Rivers came to the decision after multiple discussions this offseason.

Although Rivers no longer has a position in the first office, he will remain involved in making decisions with new general manager Lawrence Frank, according to Wojnarowski:

Both Frank and Rivers will report directly to the owner. Frank and Rivers enjoy a strong personal and professional relationship, which has allowed for them to cement a shared vision on the franchise’s future.

The Clippers hired Rivers as coach and president after his very successful, nine-year coaching stint in Boston, where a won a championship. He’d filled both roles for the last four seasons. Under Rivers, the Clippers have averaged 54 wins and finished in the top four of the West each year, but they’ve only won two playoff series.

Ballmer, who bought the Clippers after the Donald Sterling fiasco in 2014, said in his his three years as an owner he’s learned the front office and the coaching staff should have some separation:

“I’ve owned the team for three years now, and I really better understand what an owner’s responsibility is — and it turns out that running a franchise and coaching are two enormous and different jobs. The notion that one person can fairly focus on them and give them all the attention they need isn’t the case. To be as good as we can be, to be a championship franchise, we need two functioning strong people building teams out beneath them. There needs to be a healthy discussion and debate with two strong, independent-minded people.

“There are different relationships that a player needs to have with the coach and the front office,” Ballmer added. “Doc put Lawrence in charge of the non-coaching aspects of the front office last year, and he’s done a fantastic job. I want each of them to dig in and do what they do best. Lawrence has come on so strong in that role, and that has helped us go down this path.”

The Clippers are in a difficult spot after losing Chris Paul this offseason — a development that may have been Rivers’ fault — but they re-signed power forward Blake Griffin and traded for small forward Danilo Gallinari to remain cleanly in the 2017-18 Western Conference playoff picture. They’ll have nine new faces on the roster next year, so it’s no surprise the Clippers want Rivers focusing on coaching as much as possible.