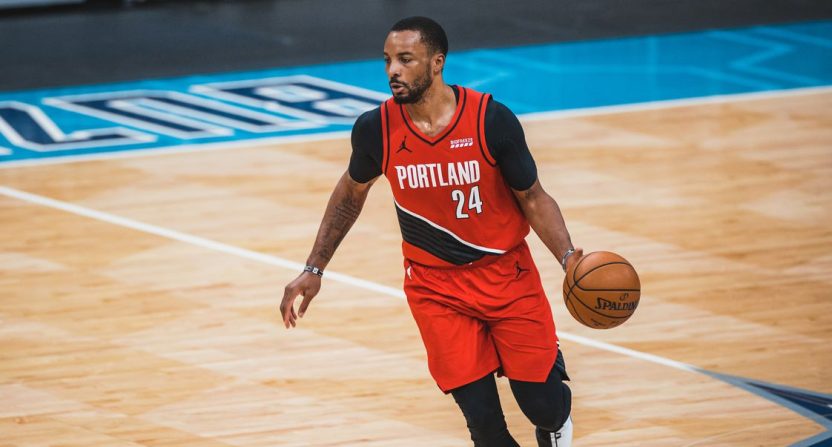 With only six days until the annual NBA trade deadline, we finally have our first big deal of the season.

ESPN’s Adrian Wojnarowski is reporting that the Los Angeles Clippers are trading Eric Bledsoe, Justice Winslow, and Keon Johnson along with a 2025 second-round pick to the Portland Trail Blazers for Norman Powell and Robert Covington.

If the playoffs started today, both teams would be in the play-in tournament for the Western Conference but have been struggling.

The Clippers have been without stars Kawhi Leonard and Paul George for most of the season, while the Trail Blazers have been missing star point guard Damian Lillard, who will be out for at least a couple more weeks after undergoing abdominal surgery back in January.

Here are some reactions around the NBA world on the trade.

The Blazers traded Gary Trent for Powell and 2 FRPs for Covington then turned it into this a little over a year later. Not great https://t.co/2TPThCtADw

The Blazers finally get below the luxury tax at $906k under.

The Clippers clear a roster spot but increase their luxury tax payment by $19M. I would expect they reduce payroll in a salary dump later this week. Powell and RoCo are great additions looking into next year. https://t.co/SM9GoFpEmz

Damn, that's a steal for the Clippers…Does this mean that the Blazers are now in full sale mode? https://t.co/fAeI9rj05v

It is clear that each side needed to shake things up following a disappointing first half of the season and this trade makes sense for both.

The Clippers are in a better situation than the Trail Blazers and will get some help that can ease the pain of missing George and Leonard while retaining the big piece in this trade for next season in Norman Powell for when Leonard is fully healthy next season. Powell has been averaging 18.6 points per game this season for the Trail Blazers, something that the Clippers can certainly use as a third option going forward behind Leonard and George.

The Trail Blazers get some youth coming back in last year’s first-round pick Keon Johnson from the Clippers, while getting under the luxury tax.

This trade could be one that is unpopular for Trail Blazers fans right now, but it further reiterates the point that this current team is just not working the way it was constructed. This move could also spark a full-on fire sale for the Trail Blazers, who are reportedly in no rush to bring back Damien Lillard from his injury.

It will be interesting to monitor the Trail Blazers for the rest of this trade deadline. Rumors have sparked recently about the team moving shooting guard C.J McCollum before the trade deadline. If this is any indication, it could come sooner than you think.