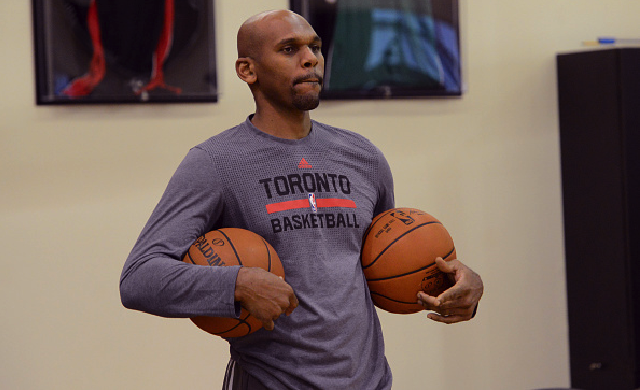 After an 18-year NBA career, including two All-Star selections, Jerry Stackhouse knew that he didn’t want to fully leave the game of basketball. He spent one year as a television analyst with the Detroit Pistons before joining Dwane Casey’s staff with the Toronto Raptors last season.

Toronto reached the Eastern Conference Finals last season, and team president Masai Ujiri decided to give Stack a larger role. So Stackhouse will begin a new chapter in his coaching career as the head coach of Raptors 905, Toronto’s D-League entry.

While the Raps were in training camp last week in Vancouver, Stackhouse conducted a Q&A over the phone with The Comeback about why he went into coaching, his perspective on so many Hall Of Fame players retiring at once and the biggest challenges he faces in the D-League.

What made you want to take this D-League job coaching Raptors 905?

I want to coach. I think it’s great to be a part of a great organization that wants to allow guys to get better and improve on what they’re doing. I don’t think it was just me wanting to do it, but the fact that I was able to contribute to the team last year in the assistant coach role. Masai and those guys thought it made sense for me.

Obviously, I’m appreciative of the opportunity, but I want to get in as many reps as I can. It’s just like playing the game of basketball; you get better the more reps you get. And I’m just able to get more reps having the opportunity to run my own team this soon. I just think it’s a blessing.

What made you want to get into coaching in the first place?

I think I’m a natural leader, and I love the game. This is what I know. I’ve been doing this for 20 years, and then just say I’ll go on Wall Street and do well in that, well, that’s not what I know.

What I know is the game of basketball and how it should be played. I think I have a good rapport with players and understanding their needs and what they need to get better and accomplish their goals. All these young guys trying to get in the NBA, they need a blueprint of how to be successful. And I think I’ve had enough success and seen enough successful players and people to be able to help and guide them to their dream and their ultimate goal.

What’s the best piece of advice you’ve gotten in coaching?

That there’s more than one way to do things.

I think you have to be open-minded and you have to be able to keep improving, keep looking at different ways to execute both offensively and defensively, because the game changes. It’s not the same game that I started out with in 1995 here in 2016-2017. My career has spanned over three decades, and I think I’ve been able to take a lot from each decade, but knowing at the same time that what was the best practice in 1995 might not be the best practice right now.

It’s really no different than playing. You have to come back with something new every year, and I think that’s the same in coaching. You can’t get stagnant with what’s been working, knowing that teams are going to try to stop what you did last year or try to take some of your strengths away. You have to make sure that some of your weaknesses get stronger.

You mentioned your career spanning three decades. When you see iconic players from your era like Kobe Bryant, Kevin Garnett and Tim Duncan retiring, how does that make you feel?

There are a lot of great players who played. We make guys bigger than life because of the media spin that’s there now, but there are guys who never had that same kind of hype who were great players. The Bernard Kings, the Alex Englishes of our game, that a lot of people didn’t get to see. But in my mind, those guys are right there at the same level.

I don’t put a whole lot of stock into guys leaving the game. It’s just a natural progression of what’s going to happen. We’re fungible assets. Some will leave and there’s more coming.

If you had to start a team with either Kobe, Garnett, or Duncan, who would you choose?

I don’t like those types of questions. I think all of those guys are great in their own right. But probably of those three players, I would say Tim Duncan because you want to start with a center. It’s easier to find wing players,, maybe a little tougher to find point guards, but it’s hard to find a center, especially one that did all the things Tim Duncan could do.

What’s going to be your biggest challenge in coaching in the D-League?

I don’t know. That’s why I’m doing it, to figure out what my challenges are and try to find ways to improve things that I have difficulty with. I don’t know what those things are right now. It’s a blank canvas for me right now. That’s how I look at it.

It’s a great opportunity. I don’t look at it like a ton of pressure. It’s about the Raptors. This is all a mechanism to really help the Toronto Raptors get better, bringing our young guys in and develop other guys we’ve identified as guys who have potential to one day be a rotation player in the NBA. That’s what it’s all about. It’s about player development.

Over the past few years, a lot has been made over the size of the D-League salary scale compared to Europe. Do you think that’s something the NBA needs to address?

But I do think that you’ve gotta make sacrifices at some point, and guys who decide to stay in the D-League when they have those types of opportunities overseas, and it says something about them. It says they’re committed and want to make the NBA. They feel like the best opportunity to get it is in here. General managers and coaches, they see that. They could have made $50,000 to 100,000 more in Europe and they took less to give themselves a chance.

But with all the revenue in the game right now, it’s something that will probably be addressed and it’ll help the talent pool because guys gotta feed their families and we understand that.

Last question for you. Some of these D-League cities are in Reno and Sioux Falls and Northern Arizona. What do you think about going to all these small little towns you may have never been to before?

I’m from Kinston, North Carolina. That’s a little town and I’m not afraid of little towns. I grew up in one. As long as there’s a gym and you’ve got two baskets and an airport that we can fly in and out of, I think we’ll be all right.