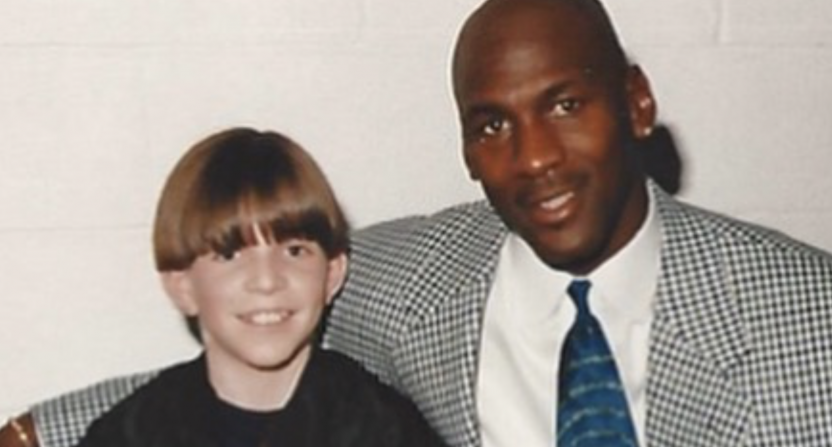 Every once in a while, you hear a story about someone posing as a reporter or security to get into a sporting event. While it’s way tougher to do now, it was way easier to do in the pre-9/11 days. As long as you looked the part and gave a perception like you’re supposed to be there, I can’t imagine too many people questioning you.

This leads to a pretty amazing story about how a stand-up comedian and his father got to meet Michael Jordan through some less than honest means during the heyday of the Bulls dynasty. Gary Vider, who was a finalist in season 10 of America’s Got Talent, posted some pics on Instagram and told a story about how his father posed as a photographer and he posed as a kid reporter from Sports Illustrated for Kids.

Vider said that from 1993-97, he and his father were able to get into the locker rooms of Madison Square Garden and Nassau Coliseum and “interview” the stars, as well as get pictures and autographs. This included the 90s Bulls with Michael Jordan, Phil Jackson, and Scottie Pippen, along with Bill Murray.

The scam went off without a hitch but there was a close moment. Vider said an actual SI for Kids reporter and photographer showed up on the night MJ went for 55 points in 1995. In a genius move, Vider’s father had them meet the actual reporter and photographer to ease any potential suspicion. And then when security limited access to everyone in the locker room after the game, the fake reporters got in instead of the real ones.

From 1993-1997 My father and I ran a scam saying I was a reporter for Sports Illustrated for Kids and he was a photographer. My dad would smooth talk our way into games at Madison Square Garden and Nassau Coliseum without a ticket and get us access into the locker rooms. When we would get in the locker room I would (fake) interview the players, take pictures, and get autographs. One of the closest calls we ever had was Michael Jordan’s first game back at MSG after he took a year and half off to play baseball. We’d been to the Garden countless times before but this time an actual reporter and photographer for Sports Illustrated for Kids showed up. My dad made it a point for us to say hi to them, never telling them who we were. I remember thinking as a 10 year old this it we are going to jail. After watching MJ score 55 points my dad and I rushed to the locker room. Security was limiting how many people could get through, even press. We wound up getting in and the real Sports Illustrated for Kids didn’t. This pic is from my “interview” with Michael Jordan. #michaeljordan #scottiepippen #philjackson #billmurray #nba #lastdance #chicagobulls #basketball #scam

This is definitely not something that is recommended but looking back, it does make for a great story. And while Vider wasn’t actually a reporter back then, the encounter did result in some great content. It just took 25 years and The Last Dance to make it happen.