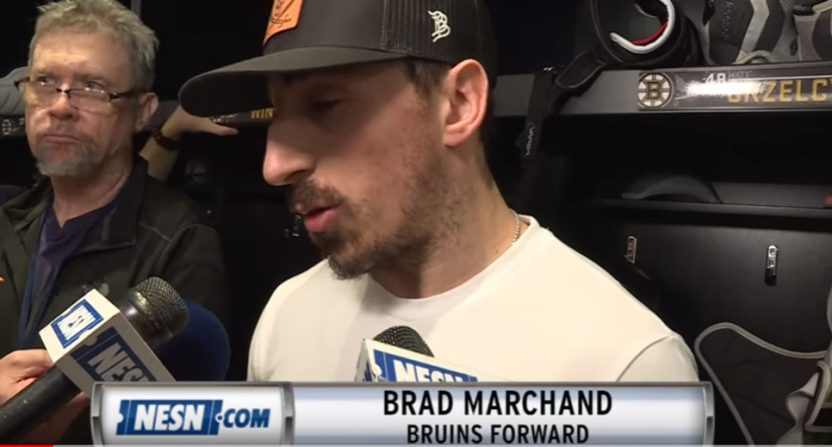 A time-honored tradition after a team’s playoff exit is relaying comments from players, coaches and executives about what went wrong and how they’ll improve next year, but so many of those comments are so rote and so expected that it’s worth wondering if there’s any value to them. That’s perhaps especially notable from a pair of pieces that came out on NHL.com and NBA.com respectively Wednesday, with Boston Bruins’ forward Brad Marchand promising to be better (presumably meaning he’ll refrain from licking opponents) and Toronto Raptors’ GM Masai Ujiri and coach Dwane Casey promising their team will improve (while offering zero specifics on what that will mean, and in Ujiri’s case, not even offering comment on the debate as to if Casey will or won’t be back). And those raise some questions as to if there’s much of a point to this kind of coverage.

In Marchand’s case, the whole piece is full of vows that he’ll bring less negative attention to the team, saying the criticism he drew for his repeated licking incidents was “a bit of a wake-up call.” And maybe that will actually mean something. But what else does anyone expect him to say? “Oh yeah, I’ll be right out there licking opponents again when the regular season starts in October?” And his “Even if I drop to 25 [goals] but I cut the [stuff] out, it’s worth it” comment is flatly unbelievable; it’s something to say, but there’s zero way Marchand would actually sacrifice production for appearances’ sake, or that his coaches would want him to do that. (And last time we checked, there wasn’t much correlation between licking opponents and scoring goals; it’s not like the goalie’s retreating to a corner to avoid Marchand’s tongue.)

The only actually newsworthy thing would be if Marchand instead said something like “No, I’ll keep licking away until they make me stop.” Instead, he did what was expected, and vowed to be better, but in a way that’s not immediately trackable and one most will probably forget about by next season.

Here’s a video of him saying all this and other utterly predictable things over the span of a couple minutes:

In the Raptors’ case, we have a piece that’s even more paint-by-numbers, with both Casey and Ujiri vowing that the team will get better, but providing next to nothing on what that will mean. And in particular, it involves both saying nothing of import about if Casey will return.

Here are some examples of that:

“Nobody has told me differently,” he told reporters when asked about his future with Toronto. “Until then I’m here still fighting. I’m still here.

Ujiri said he plans to look at the roster and team as a whole and make assessments as to the future of it. In short, the next steps for the team at large is entering an evaluation process, Ujiri said, which will take place in the coming weeks.

About the only notable thing there is that Ujiri hasn’t told Casey he will or won’t be back. And his “We’ll evaluate everything” approach is so painfully standard, right up there with NFL coaches’ “We’ll look at the film.” His actual quotes are a complete nothingburger, too:

“I believe in Dwane Casey, I believe in the work he’s done, it’s not different than anything I’ve said last year,” Ujiri said. “I’m looking at everything, negative and positive and how it all comes together.”

Look, it’s understandable why these questions get asked, why these responses are given, and why these pieces get published. Outlets want to provide one last piece of coverage on a team before the offseason really kicks in, and there are plenty of fans willing to read that before moving on. And it’s understandable why you’d want to get players or coaches on the record as to what’s ahead. But so little typically comes of these interviews, as many key offseason decisions aren’t even made at this point, and a player’s comments about being better have no actual impact, especially when they’re made months ahead of that player’s next competitive game.

And there’s no incentive for anyone to say anything interesting; teams have a significant amount of time to decide on coaching and personnel moves before important deadlines, so they can be non-committal, and everyone can always talk about how they’re going to be better when there’s no immediate way to check if they will be. It’s the equivalent of the “best shape of his life” stories that always pop up during MLB spring training. There’s no real way to change this; media are always going to be doing these kinds of exit interviews even if nothing interesting is said, while players and executives are obligated to do them but incentivized to be boring. But when so many responses are so rote that they could be generated by a script, it’s worth wondering if it’s worth anyone’s time.