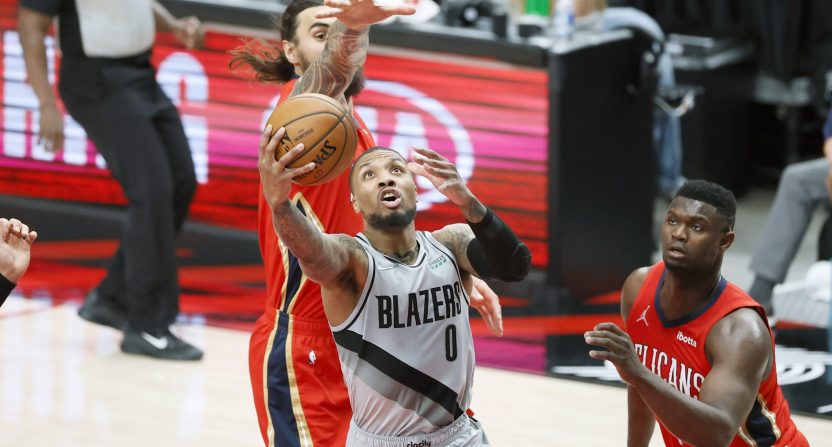 The New Orleans Pelicans were up 17 points with 5:56 remaining on Tuesday night against the Portland Trail Blazers. And lost.

In what was a combo of the Pelicans melting down and the Trail Blazers doing amazing things to make a comeback, Portland took down the Pelicans 125-124.

Entering the game, NBA teams were 236-0 when leading by at least 17 points in the final six minutes of games this season, according to ESPN Stats and Info.

From @ESPNStatsInfo: Entering tonight, teams were 236-0 when leading by 17+ points within the final 6 minutes of the game this season.

The final sequence was wild. The Pelicans fumbled an inbounds pass for a turnover with 4.2 seconds left, while having a one-point lead. That gave the Blazers a chance, and Damian Lillard was fouled on a long jumper with 1.2 seconds left. Lillard nailed both free free throws to give Portland the lead, and Lonzo Ball and Zion Williamson almost saved the Pelicans with a crazy Hail Mary play. But Williamson’s shot off the glass didn’t fall, giving Portland the victory.

Nice play from New Orleans off that Dame FT, Zion nearly flipped the score back pic.twitter.com/xHRgYQlqgq

Lillard scored a season-high 50 points, with 20 of those points coming in the fourth quarter.

⌚️ @Dame_Lillard scored 20 of his season-high 50 points in the 4th quarter to help the @trailblazers come back from 17 down! pic.twitter.com/20wTsP0GZR

Lillard also went 18-of-18 at the line, and Portland went an incredible 31-of-31 at the charity stripe. So if the Blazers went, say, 29-of-31 on free throws, they would’ve lost. The 31-of-31 performance is good for the sixth-most free throws without missing by a team since 1954.

The Blazers went 31-31 from the free-throw line tonight.

That’s the sixth most FT without missing by a team since 1954. pic.twitter.com/HTg8LsnYvL

Amazing comeback by the Blazers, and a brutal, heartbreaking loss for the Pelicans.