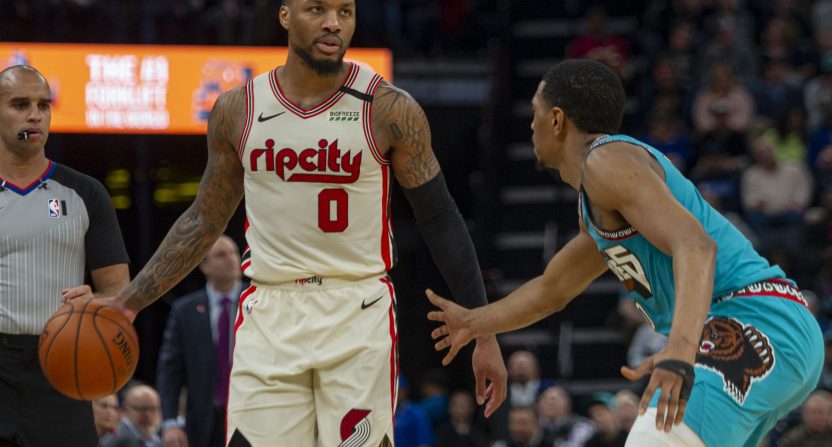 The Blazers lost to the Grizzlies in Memphis tonight, 111-104, but the loss wasn’t the worst news for Portland.

Damian Lillard exited late with an obvious groin injury; he was able to walk, but clearly something wasn’t right.

Damian Lillard appears to have injured his groin on this play. Couldn’t run and went straight to locker room pic.twitter.com/oz4J2skhkE

It’s not the worst timing for Portland, although there’s never a good time for your superstar to get hurt. But tonight was Portland’s last game before the All-Star break; they won’t be in action again until next Friday. That gives Lillard some time to recover, although it does mean that he won’t be participating in the All-Star Weekend festivities. (He’d been set for the game itself, obviously, along with the three-point contest.)

Afterwards, Lillard announced that news himself, and also went out of his way to mention Devin Booker by name as someone he hoped would replace him.

Damian Lillard injured his groin in the final minutes of the Blazers loss to the Grizzlies on Wednesday. Deciding to put his health first, Lillard confirmed in the postgame locker room that he will not participate in the All-Star Game or 3pt contest. #RipCity pic.twitter.com/PNOTtXoMbG

Booker certainly seems the most likely replacement, and he’d definitely be deserving. He might also take Lillard’s spot in the three-point contest, too. It’s a shame that Lillard, one of the more entertaining players to watch in an All-Star setting, and the weekend is always better with the biggest names in the sport. Still, Portland currently sits four games out of the playoffs, so they’re probably not that mad about the timing.