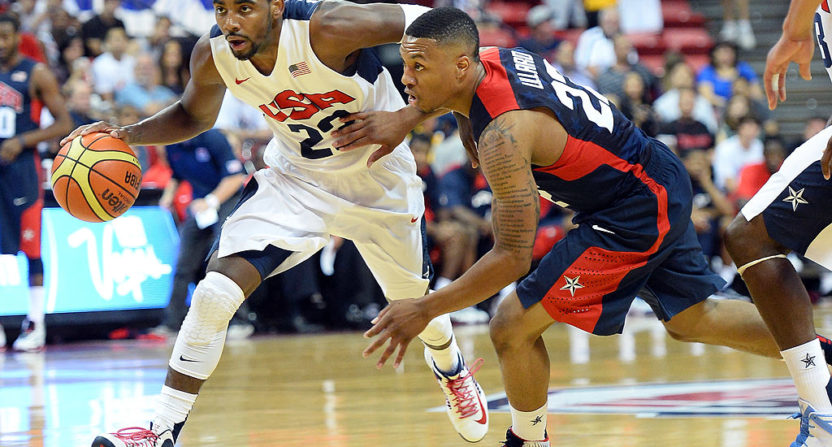 It’s the trade request heard around the world: Kyrie Irving wants out of Cleveland.

But why would Kyrie want out of Cleveland? He’s been to the NBA Finals for three seasons in a row, won a ring in 2016, and plays with arguably the best player in the world. So why would he want out?

These are all good questions brought up to Portland Trail Blazers star Damian Lillard who was somewhat critical of Irving for his trade request, specifically in response to reports that Irving wants a situation like Lillard has in Portland where he can be the centerpiece of a franchise.

Lillard appeared on SI Now and talked about the Irving situation, befuddled that anyone wouldn’t want to have a golden ticket to the NBA Finals every year:

“Who wouldn’t want to go to the Finals every year?” Lillard said. “I think they’ve been to the Finals the last three years. I would love to do that.”

“I don’t know because I’ve never played with LeBron,” the Portland guard added. “Just watching from the outside, you see how easy he makes the game for everybody else. I’m not sure what it’s like playing with LeBron in person but the player, I’m not sure why anybody wouldn’t want to play with him.”

Lillard does make some excellent points. LeBron the player is a tremendous sight to behold and there’s no question his abilities probably make Irving better. Whether it’s getting open for Irving to dish it to him or vice versa, there have probably been plenty of times where LeBron has made Irving a better player.

Plenty of people would probably be on Lillard’s side in this scenario. Just look at Twitter:

I mean, if after three Finals, Kyrie Irving is jealous of John Wall and Damian Lillard, I'm not sure what the Cavs are supposed to do.

When Kyrie Irving was "The Man" in CLE before LBJ, #Cavs had a horrid record of 78-152. LeBron James was the best thing for Irving's career.

Don't underestimate how strongly the #Cavs will be lowballed on @KyrieIrving offers. Oh, and @drose is not the answer. This is major crisis.

Kyrie Irving: "I want to be traded."

Irving would have no ring and no finals appearances if it weren’t for LeBron (and Kevin Love to an extent) so to come out and request a trade right now when the Cavs are arguably one piece away from another title is stunning.

Then again the NBA is a wild league and anything can happen really.