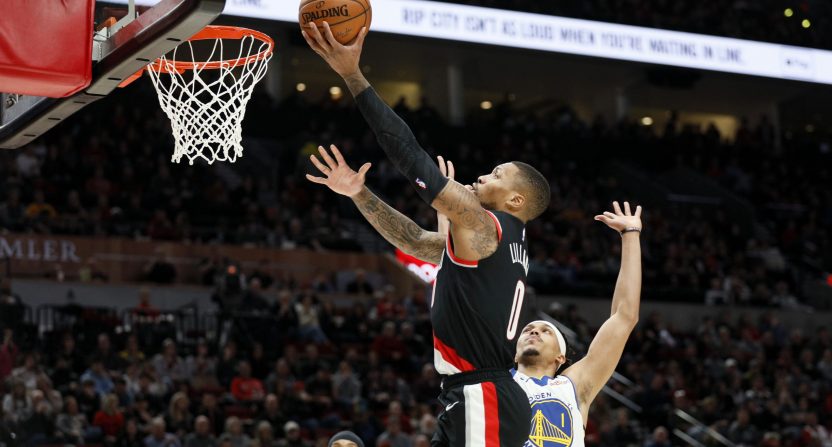 At one point in the third quarter, the Golden State Warriors were up by as much as 12 points. However, it was not meant to be as point guard Damian Lillard put the Portland Trail Blazers on his back as his career high 61 points got Portland a 129-124 win in overtime.

Lillard was a shooting machine all night. Get a load of some of these stats. Lillard had 61 points, was 16 for 16 from the free throw line and 11 for 20 from three. He broke the record for most points on Martin Luther King Jr. Day (Kemba Walker 52 points in 2016) and broke his own team record which he set earlier this season.

Not only was Lillard lethal from three, he was lethal from deep in three point range. That has been the case all season but this was something else.

Once Dame steps over half-court he's within range! 🎯🔥

I get that NBA players are shooting from deep with more and more efficiency but being able to pop 30+ foot jumpers as if it’s nothing is amazing and that’s what Lillard was doing all night. His most important show was his fadeaway three point jumper with just 16 seconds left to send the game to overtime.

The five minute overtime period was a tale of two halves. The Warriors got off to a tremendous start as they scored the first six points of the period. Then the resilient Trail Blazers clawed back with a Hassan Whiteside dunk. With 1:39 to go, the Trail Blazers cut the deficit in half with a crucial Anfernee Simons three. After the Warriors missed the ensuing jumper, Lillard drilled another three and Portland was suddenly tied with less than a minute left.

34.6 to play on @NBAonTNT pic.twitter.com/LRtydG39EM

A Warriors three from Alec Burks with 33 seconds left got the Warriors the lead but it was short lived. Six consecutive free throws, with four made by Lillard and two made by Whiteside not only gave the Trail Blazers the lead but sealed the game once and for all.

This win was very crucial for the Trail Blazers as they move to 10th in the Western Conference. To make the playoffs, you must beat the teams you’re supposed to beat and an injury depleted Warriors team who’s last in the West fit that bill. And given the Trail Blazers are facing some of the best teams in the NBA one right after the other for the next couple weeks, they needed this win tonight.