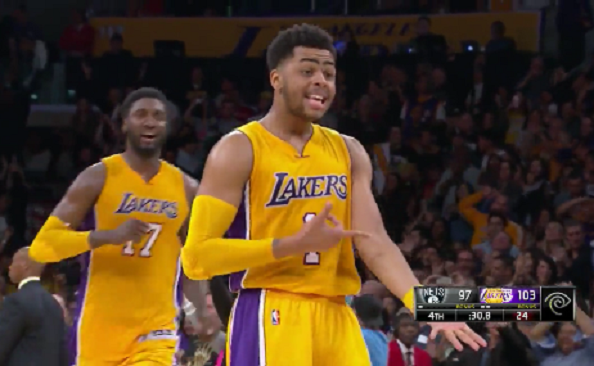 Los Angeles Lakers head coach Byron Scott recently decided to finally take the training wheels off D’Angelo Russell, and wouldn’t you know it, the playing time is paying off for the rookie’s development and confidence (weird how that works).

Russell went bonkers on Tuesday night at Staples Center, scoring 39 points (14-of-21 on field goals) and hitting eight three-pointers in the Lakers’ 107-91 win over the Brooklyn Nets.

The best moment of Russell’s night came in the game’s final minute, as he hit a dagger three, and then proclaimed, “I got ice, in my veins!”

Lakers rookie D’Angelo Russell hits the big three and says, “I got ice, in my veins!”https://t.co/91Y4pp7gvZ — Bleacher Report (@BleacherReport) March 2, 2016

“ICE IN MY VEINS” pic.twitter.com/DX5kKNWLFL

It’s been a miserable season for the Lakers (12-49), but their fans definitely have something to be excited about in this 20-year-old point guard.