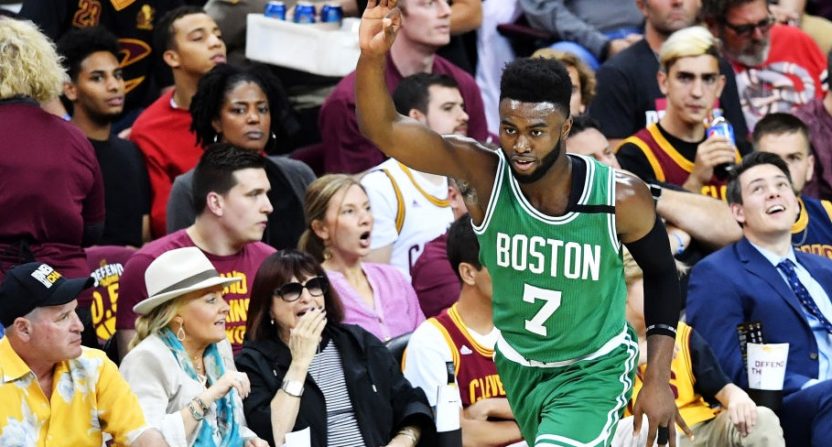 Each NBA season, young players who either develop into vastly improved players or take advantage of larger roles and opportunities have big breakout seasons. We tried predicting breakout players for last season exactly a year ago, with pretty damn good results.

Nikola Jokic was unbelievable for the Denver Nuggets last season, and was a major reason they signed All-Star forward Paul Millsap in free agency in July. Dennis Schröder averaged nearly 18 points and over six assists per game for the Atlanta Hawks last season in his first year as their starting point guard. Zach LaVine and Clint Capela also saw big jumps in production from last season, while Jonathon Simmons, Kentavious Caldwell-Pope, Mario Hezonja and Alex Len didn’t quite improve as much as originally thought.

This year, as last season, we’ll put out our starting lineup of breakout stars, followed by a second team of honorable mentions. There are also five other players who either broke out too much to make this list, Miami guard Tyler Johnson and Utah guard Rodney Hood, and three players we’ll get to later who are projected to be on next year’s All-Breakout Team.

The only rules we’re holding to with the list are no rookies and no players who have previously been mentioned as breakout candidates.

Jettisoned out of Los Angeles because of maturity issues and the impending arrival of native son Lonzo Ball, Russell now finds himself in a very advantageous position with the Nets.

After starting 60 games last season for the Lakers, averaging 15.6 points and nearly five assists per game on 35.2 percent shooting from three, D’Lo will have every opportunity to average 20 points per game for Kenny Atkinson’s Brooklyn squad. Los Angeles was sixth in pace last season, averaging roughly 98.5 possessions per 48 minutes. The Nets ranked first in pace, at 101.3 possessions.

Expect Russell, 21, to be more of a focal point in the offense than he was with the Lakers, giving him the opportunity to really boost his scoring numbers. He needs to distribute the ball better, and definitely needs to defend a lot better at this level. But the Russell we saw after last season’s All-Star break — when he scored 18.5 points per game and shot it well from three — could be further enhanced by Atkinson’s offense. If Russell executes, he will shine with the Nets.

There’s a reason why Harris, who just turned 23, was at the center of trade rumors over the summer that would’ve sent Kevin Love to Denver and Paul George to Cleveland. He’s a really good player, and is going to get even better this coming season.

Harris averaged nearly 15 points per game on 50.2 percent shooting from the field in his third full season in the league, and finished eighth in the NBA with a 42 percent field goal percentage from three. He also finished 14th in the league last season with a 121 offensive rating— an estimate of the number of points a team scores per 100 possessions while a player is on the floor— and finished ahead of Klay Thompson in ESPN’s offensive Real Plus Minus rankings.

As Jokic evolves and Denver improves at the point guard position, Harris will continue to grow offensively. He still has a lot of room to improve defensively, but Harris has a great chance to put up some big offensive numbers this year.

My NBA introduction to last year’s third overall pick was at a Manhattan gym, where the Celtics were preparing for a preseason game. While the veterans were resting towards the end of practice, the younger players were playing one-on-ones and three-on-threes, and Brown was making jumpers and looking extremely spry and athletic.

I went over to power forward Amir Johnson, now with Philadelphia, and commented that Brown looked pretty good. “That kid can play,” Johnson said. Boy, was he right.

After playing just 17.2 minutes per game in his rookie season for Boston last year, the 20-year-old could end up being a regular starter for one of the league’s elite teams. Brown’s minutes increased to just over 20 following the All-Star break, and was greatly improved on the offensive end.

If Brown can sustain those shooting numbers over the course of a full season, aided by strong offensive additions in Kyrie Irving and Gordon Hayward, he’s going to be a real problem for Eastern Conference defenses.

One could argue that the 6-foot-8, 23-year-old forward broke out last season after averaging over 14 points and five rebounds per game while starting 59 games for the Suns, but it really seems like he can reach another level this coming season.

Warren really hit his stride over the last quarter of the season, specifically from March 1 and on when he started all 19 games and started rebounding at a much higher level.

Those final two months of the season gave the Suns, and the league, a glimpse at what Warren can become. Warren needs a ton of work on defense, he ranked 68 out of 70 eligible small forwards last season in defensive RPM, and has to shoot the ball better over the course of an 82-game season. But he has the chance to become an 18-point, eight rebound type of player in his age-23 season. That would give Phoenix an important foundational piece as it looks to rebuild around Devin Booker.

Sometimes, the old cliche that some players need a change of scenery or a new situation in order to thrive rings true. It certainly did with Nurkic, who proved that he couldn’t play effectively in Denver in the same lineup as Nikola Jokic. His attitude was poor, and eventually Nurkic was traded to Portland in February with a first-rounder for Mason Plumlee.

Once Nurkic arrived in Oregon, The Bosnian Beast was truly unleashed, becoming one of the most fun players to watch over the last quarter of the regular season. Check out the difference between his time with Denver and Portland last season.

If given similar playing time and touches with the Blazers this coming season, Nurkic can definitely average a double-double and emerge as a borderline All-Star candidate, though that’s probably pushing it in the Western Conference. But Nasty Nurk seems destined to have a breakout 2017-2018 campaign.

Curry played more than 45 games in a season for the first time and averaged nearly 13 points and three assists per game on 42.5 percent from three. He has the chance to be a very good NBA player, and not just Steph’s brother.

Hield is another player, like Nurkic, who benefitted from a midseason trade. Sent from New Orleans to Sacramento in the DeMarcus Cousins deal, Hield averaged over 15 points and four rebounds per game on 42.8 percent from three over the final 25 games of the season. Let’s see how he does in his first full season with the Kings.

Toronto and opposing scouts are really high on Powell, who will likely get a big minutes increase from his 18 per game. He could see some time as the starting small forward, competing with newly acquired C.J. Miles.

One of several players sent to L.A. from Houston in the Chris Paul trade, Dekker could put up some nice numbers for the Clippers if given enough playing time by ex-Clips general manager (and still coach) Doc Rivers.

With Joakim Noah’s health still in question, Hernangomez should get plenty of playing time alongside old Sevilla teammate Kristaps Porzingis. The way Hernangomez runs the floor, he should be able to really develop in Jeff Hornacek’s offense now that the Triangle is (probably, we hope) gone. Averaging a double-double could be in his immediate future.

Prince averaged 11 and four when he started last season — only 10 games — which he should do a lot more this coming season for the rebuilding Hawks.