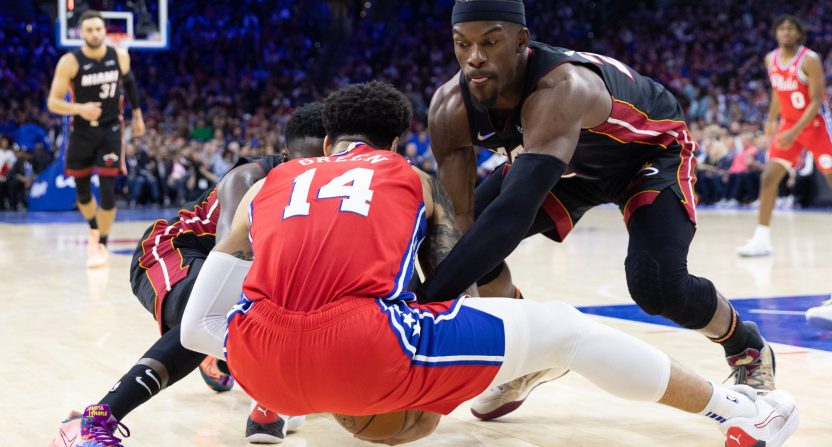 The Philadelphia 76ers had their season come to an end on Thursday. A day later, the news wasn’t getting any better.

During Philadelphia’s loss to the Miami Heat, Joel Embiid fell to the ground after taking a shot and crashed into the legs of teammate Danny Green. Green left the game after being helped off of the court. On Friday, Shams Charania of The Athletic reported that Green suffered a torn ACL.

76ers guard Danny Green has been diagnosed with a torn ACL, sources tell @TheAthletic @Stadium. Brutal outcome for Green, who turns 35 in June and now faces a long rehab.

NBA fans sent their best wishes to Green following news of the injury.

I hate this so much.

Best wishes to Danny on a speedy recovery. https://t.co/KYBpECqUxu

Very tough break for Green who was saved the Sixers when Thybulle's offense didn't improve and then again when he was unavailable https://t.co/O92UCLAu17

Man…terrible news, hope he heals up and can resume playing https://t.co/QhZzTcHzVp

This is so awful. Praying that Green will be able to come back from this 🙏 https://t.co/49J9EdMlgk

Oh man. Thinking of @DGreen_14 right now. He’s a pro’s pro. Had a chance to witness his professionalism and leadership in San Antonio. Wishing him a speedy recovery. https://t.co/Lx5ZyrWd3r

The injury is brutal to the 76ers but especially to Green. He just completed his 13th NBA season and will turn 35 in June. Recovery for an ACL tear is normally at least a full year so Green will probably be 36 by the time he’s healthy enough to play again.

Furthermore, he just completed the first year of a two-year, $20 million deal but the $10 million owed to him for the 2022-23 season is not guaranteed if the 76ers waive him before July.

Green’s role shifted this season. After starting in all 69 games he played during the 2020-21 campaign, he was used primarily as a bench player, starting in only 28 of 62 games. In those games, he averaged 5.9 points, 2.5 rebounds along with one assist and one steal.