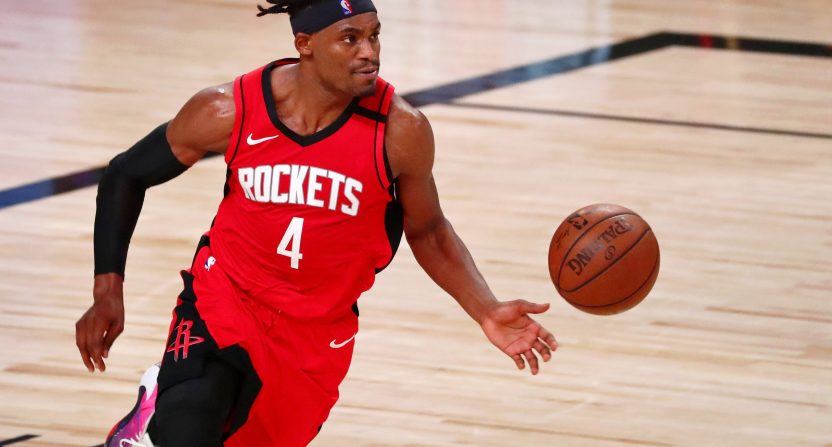 Houston Rockets forward Danuel House Jr. was a late scratch for Game 3 of the team’s series against the Los Angeles Lakers due to personal reasons. And on Wednesday’s official injury report, the Rockets listed House as out for Game 4, once again for personal reasons.

Well, according to ESPN’s Adrian Wojnarowski and Tim MacMahon, House’s status for the rest of the second-round series “is in jeopardy as the NBA probes a potential violation of bubble protocol.” House has reportedly denied any wrongdoing.

Reporting with @ESPN_MacMahon: Houston Rockets forward Danuel House Jr.’s status for the remainder of the Western Conference semifinals is in jeopardy as the NBA probes a potential violation of bubble protocol. House has denied any wrongdoing to the league.

Wojnarowski and MacMahon add that House “did not leave the perimeter of the campus, sources said.”

In July, Houston’s Bruno Caboclo was forced to quarantine for  10 days after “inadvertently” violating bubble protocol, and the Sacramento Kings’ Richuan Holmes had to do the same after crossing the bubble line to pick up a food delivery. Wojnarowski and MacMahon report that “the NBA is believed to be considering whether House could be subjected to a 10-day quarantine period for an alleged violation, sources said.”

The Rockets trail the Lakers 2-1 in the series, with Game 4 set for Thursday night.

UPDATE: The NBA announced on Friday that Danuel House has been kicked out of the bubble. The NBA said in a statement that House “had a guest in his hotel room over multiple hours,” and that guest “was not authorized to be on campus.”

Rockets sixth man Danuel House has been kicked out of the NBA Bubble for having "a guest in his hotel room over multiple hours." The NBA says the guest "was not authorized to be on campus." pic.twitter.com/mhZHIo19pJ