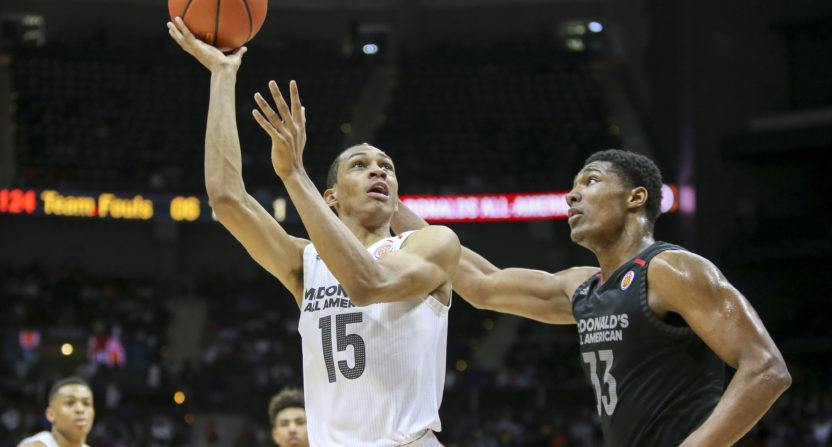 In the wake of the FBI investigation and subsequent scandal that rocked college basketball earlier this year, a popular thought was that high school athletes would no longer play the “amateur” game. In college basketball, it’s the athletes that continue to make millions for the schools and administrators while they continue to earn pennies on the dollar for what they’re really worth.

With the NCAA’s “amateur” system being exposed as more and more of a bad deal for athletes, will we now see more top high schoolers foregoing college altogether and going pro elsewhere?

Already, the answer to that question is yes.

History will be made this year when highly touted recruit Darius Bazley will become the first projected lottery pick to go straight from high school to the NBA’s developmental route, the G League. There have been other high schoolers that have chosen to play professionally overseas, but Bazley will be the first top recruit to go pro through the NBA’s own developmental league.

In doing so, Bazley decommitted from Syracuse and told Yahoo Sports why he felt it was best for his present and future career:

“This is a life-changing decision,” Bazley, one of the top players in the Class of 2018, told Yahoo Sports. “I put a lot of thinking into this with my mom and close circle, especially sitting down with her. It’s just like making the decision to which college you want to go to. Me and her did some talking, and I prayed on it. I talked to my high school coach, Steve, who played overseas, and then I talked to a couple of guys in the G League who have experience. Ultimately, playing professional basketball has always been my dream. It’s always going to be the dream goal, always going to be the goal until I achieve it. This is going to put me one step closer to doing so.

“The G League will have the most to offer, considering that is the development league for the NBA,” he continued. “I will get more out of that than going overseas. The G League is the closest thing to the NBA. I see most guys now are spending time in the G League even after they went to school and the draft, so this gives me the chance to accelerate the process. There have been a lot of successful guys who have been brought up in the G League, and I’m confident that I will be one of them.

“I’m self-motivated because I know this is what I want to do for the rest of my life. This is how I want to make a living. This is how I want to provide for my family, and provide for my love of basketball. I’m not playing any games with this. I’m attacking this straight forward. I’m not maneuvering around this, take any side steps. I’m taking this head on. This is the decision that I made, and I know it will work. I know what I’m capable of doing, and I’m going to do just that.”

This is a huge deal. Bazley just put up 11 points in the McDonald’s High School All-American Game and is the 8th rated recruit in the entire country according to 24/7 Sports and a five star prospect.

So why is Bazley the first major recruit to make this jump even though it’s been put forward more and more by people within the league as a legitimate option for high schoolers looking to skip college. Nobody has attempted this move yet simply because the money isn’t really there for high schoolers entering the G League with no possibility to go to the NBA. As we wrote about last month, the maximum salary is very low for high schoolers entering the league around $26,000 per year. However, Bazley clearly sees that it’s better for his future to play with NBA players, under NBA coaches, in NBA systems versus earning some extra dollars by going overseas. Bazley will go into the G League draft to enter into the league, but obviously won’t be eligible to be called up to his team’s NBA affiliate thanks to NBA Draft rules.

The decision could carry a significant risk-reward potential. If Bazley performs well, he can prove to teams that he would be ready to step in from Day 1 already familiar with NBA systems. If he struggles though, it could lead teams to move him further down the draft boards than if he were playing in an unfamiliar environment overseas.

If the G League is a positive step forward for Bazley, it could prove to be transformational for the entire fabric of basketball. Any early success could open up a new pathway from high school to G League to NBA. And if the NBA invested more money into the G League (for salaries specifically) they could become an even more attractive alternative to the NCAA. Perhaps then we might see college athletics finally respond and fix their broken system as the top athletes decide it’s just not worth it anymore.