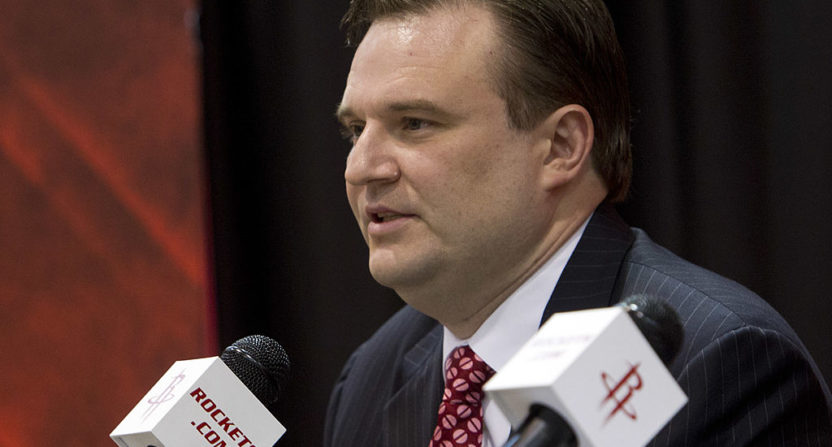 Daryl Morey has a reason to publicly dislike NBA awards voting, specifically the MVP award. One of his star players, James Harden, has been on the losing side twice now despite having a very good case both years, and each time, the narrative spun against him. Plus, Morey is above all else a process-over-results person, which is a fantastic trait in any executive, regardless of industry.

What Morey isn’t, though, is a polished, choose-your-words-carefully executive, in the mold of Theo Epstein. It’s what leads to quotes like this one, where Morey attempts to make a decent point about why awards voting is a flawed and perhaps outdated way of recognizing on-court achievements, and yet comes across as the whining smart kid:

“I don’t know if this is a good process,” Morey told The Crossover. “The ones that are decided by players or executives or media, they all have their strengths and weaknesses. I honestly don’t think there’s a good process. You could argue for eliminating the awards altogether. I don’t really see a good way to do it that doesn’t have major issues. I like clean answers. If there’s not going to be a set criteria and there’s going to be issues with how it’s structured, for me it might be better to not have it.”

It’s absolutely not a good process! LeBron only has four. Michael Jordan only had five. It’s a weird, flawed vote, as with anything decided by the whims of an electorate. But when Morey tries to adopt a post-awards stance, it rings a bit hollow:

“Given that the criteria seems to be shifting away from winning, I would guess that [adding Chris Paul] probably doesn’t help anyone’s chances on our team,” Morey acknowledged. “That said, I don’t think anybody really cares [going forward]. James definitely cared and I think we all cared [about the 2017 MVP]. But we’ve moved on since the award isn’t focused on winning any more. Let’s just win and not worry about it.”

If you don’t care about it, why give an interview? Why offer extended quotes on the subject?

Daryl Morey is a very smart guy, but the problem has always been that he’s going to make that very clear, whether he intends to or not. If Morey wants to offer viable alternatives for awards voting, he should do that. If he wants to not care about the awards voting, he’s free to do that, too. But taking stances like the one above leaves you very open to taking shots like this:

honestly, we should do away with championships too. seems dumb to me. participation trophies for everybody. don't @ me https://t.co/Hdnow9GoQO