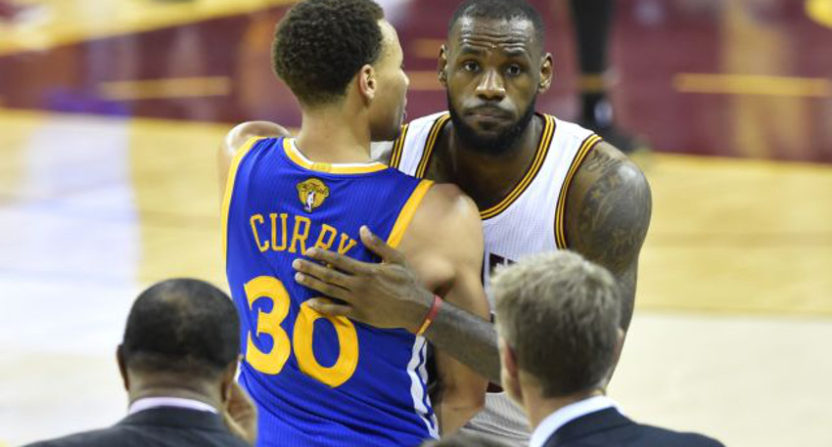 In the final weeks of 2019, The Comeback is taking a look back at the 2010s in every major professional sport, reminiscing on the biggest moments and pondering the trends and changes that will take hold entering the 2020s. To start, we’re diving into the NBA.

Before anything else, let’s start with this: There is no way to talk about the last 10 years of NBA basketball without talking about LeBron James. He made an appearance in the NBA Finals eight times, winning three times with two teams, and he set the path for the league as a whole by making three separate major free agency decisions. There would be less player empowerment and likely fewer superstar-driven rosters without LeBron’s influence. It’s fair (and probably correct) to suggest that he has overtaken Michael Jordan as the greatest player of all time. This was the LeBron decade.

Everything else comes alongside the run of an all-time great, who dominated pretty much every league storyline and played considerably better basketball than everyone else for most of the decade. We’ll touch on that and some other important things as we look back on the 2010s in the NBA:

There are three teams that immediately come to mind: The “Big Three” Miami Heat, the 2015-19 Golden State Warriors, and the LeBron Cavs. We can cover every NBA Finals of the decade with those three (save the 2009-10 Lakers and Celtics, if you want to include that here).

The LeBron James-Dwyane Wade-Chris Bosh Heat did not invent the big three concept, but they built one so out in the open that they basically introduced that concept to the public. LeBron, Wade, and Bosh decided they wanted to play together, so they did. As you might have noticed, that line of thinking has become a bit of a trend throughout the decade.

Not everything went swimmingly for that Heat team initially, and the 2011 Finals loss to the Dallas Mavericks remains the clearest black mark on LeBron’s legacy. But they won the next two trophies, beating the young and exciting Oklahoma City Thunder and the late-stage Tim Duncan Spurs, finishing 2-2 in four years of NBA Finals appearances.

Heat coach Erik Spoelstra, who concludes the decade as arguably the best coach in the league, surrounded LeBron with three-point shooters. Ray Allen’s shot in Game 6 against the Spurs might be the most iconic moment of the decade. Small-ball lineups grew more and more tenable. Bosh became a legitimate threat from deep. Spacing the floor with shooters and letting superstars feast is now the modus operandi for a number of teams.

The Warriors burst onto the scene with the “Splash Brothers” (Stephen Curry and Klay Thompson, who are two of the absolute best shooters in league history) and an elegant, ball-moving system implemented by Steve Kerr. Their 2015 win in the Finals (over LeBron’s Cleveland Cavaliers, whose new big three fell apart with injuries) set the stage for the decade’s greatest dynasty.

Curry and Thompson were unguardable, with Curry launching beautiful, quick-release threes from deep and acting as the heartbeat of a complex offense. Thompson orbited, perfectly content with a role as one of the most effective secondary offensive options of all time (not to mention as a defensive stopper on the other end).

Draymond Green was the perfect complement. Green defended with out-of-this-world intelligence, covering the court three steps ahead of the opponent. On offense, when Curry drew defenders, Green turned into a better passer than Magic Johnson, capitalizing on four-on-three advantages. Andre Iguodala, 2015 Finals MVP, sewed it all together. (Shoutout also to Shaun Livingston off the bench, the epitome of the cerebral backup point guard archetype.)

Golden State shoved their elite basketball in your face. They were playing at a higher level than you, and they knew it. Kerr knew that all he had to do was give his team an outline. The Warriors were professional professionals at basketball. There was nothing they did wrong on the court, and even when they lost, you still felt their utter eliteness.

That team, with Harrison Barnes and a center added to the Curry-Klay-Dray starting core, went 73-9 in 2016. Curry rampaged to a unanimous MVP. And yet: they lost in the Finals, blowing a 3-1 lead to LeBron and the Cavs. Kyrie Irving’s shot late in Game 7 was epic. In storybook fashion, LeBron completed his career-long quest to bring Cleveland a title.

Any other Cavs championship was rendered basically impossible, though, by Kevin Durant’s signing with the Warriors prior to 2017. Durant made Golden State unstoppable, and they promptly won two more championships as the most dominant basketball team anyone has ever seen. Only a slew of injuries prevented a win in 2019, as the Toronto Raptors took the opportunity and bested the depleted Warriors in the Finals.

The Cavs were always a pot of melodrama, and no one really complained when LeBron left Cleveland for the Lakers after the 2018 Finals loss. The LeBron-Irving-Kevin Love big three was successful in its time together, though, and had it not been for injuries and Durant’s decision, they might have nabbed more than one title. The one they did get is one of the most impressive championships in league history.

As we’ll see in every sport, analytics has changed the way teams played throughout the decade. We’re getting closer and closer to ideal styles of basketball in maximizing efficiency and shot selection.

The biggest lesson: three is more than two. Teams know that three-pointers are the best possible outcome of a possession, and so the frequency of threes have skyrocketed. Go back to 2013-14, and the team with the highest frequency of threes was the Rockets at 35 percent. The grinding Grizzlies shot threes only 18 percent of the time. Now, Houston retains the league lead with 50 percent three-point frequency. The archaic Spurs sit at 28 percent, last place now but would have been good for 13th seven years ago.

The best shots are from three or at the rim. Mid-rangers are generally inefficient. One important thing to look at when discussing players and teams is their shot profile, and whether they have removed enough long twos from their diet. Those who can shoot mid-rangers still do — there can be some valuable spacing gained from being able to shoot from everywhere — but even the high-usage stars know that they’re better off taking shots at the rim or from three.

Houston has taken this to the extreme. GM Daryl Morey is a big analytics guy, and Harden is the perfect player with which to execute Morey’s ideal shot profile. The Rockets have leveraged Harden’s unique gravity and let him take huge amounts of stepback threes (basically unstoppable given Harden’s foul-drawing ability). When defenders guard him closely on the perimeter, he drives and either finishes at the rim or lobs to Clint Capela. Harden has become the league’s best scorer, consistently finishing in the top-two for MVP.

He has led the league in isolation plays every year going back to 2015-16, the earliest year that NBA.com provides data. This year, he’s at 14.5 per game, ahead of second-place teammate Russell Westbrook by a full eight isolations. He topped the NBA by 11 last year.

It’s not always fun to watch. Basketball is best when teams are passing and moving. But the Rockets provide interesting strategic questions. Teams are always coming up with new ways to defend Harden.

Not everyone will buy fully into this sort of style, in part because many fans are averse to it. (And because James Harden’s do not grow on trees.) But like a fringe political candidate who pushes things in a certain direction, the Rockets are radicals who wield influence.

The NBA is growing, despite lackluster early-season TV ratings, and the league will play an active role in determining how exactly it maneuvers forward. The regular season has decreased in importance and legitimacy, forcing discussions about a revamped schedule with an in-season tournament. Load management and a wide playoff field contribute to that.

The Western Conference was dramatically better than the Eastern Conference for almost the entire decade. The gap feels like it has decreased this season, but calls for a playoff field that disregards conferences won’t stop anytime soon.

Player empowerment is generally a positive, both from a human standpoint (players should have freedom!) and from an entertainment standpoint. The offseason is more fascinating than ever but the NBA may have to do something about the super-max contract. The move was intended to give small-market teams the opportunity to keep their stars long-term, but it has only become a thorny piece of roster-building that handicaps a team’s available money.

Increased trade requests towards the end of the decade (notably Anthony Davis and Paul George) has made decision-makers understandably worried about how much uncertainty the future always holds. There is no more thinking long-term when you have a star. Everything is focused on right now, because stars want to win and they are willing to do what they can to make that happen. Sometimes they win and they will still want to leave.

These are not easy questions. We’ll see how things go for younger players like Giannis Antetokounmpo, who reaches free agency in 2021. It’s hard for the league to do much about trade requests without dumping on the leverage that superstars have rightfully earned.