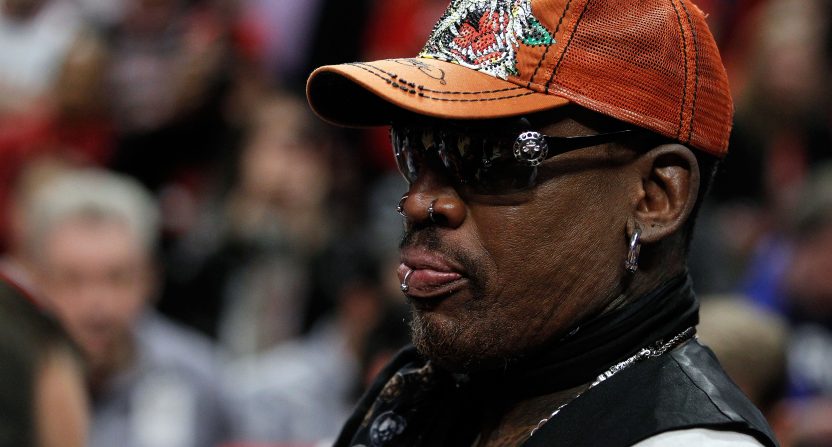 Dennis Rodman is the newest old-timer so speak out on NBA teams resting their players. As has become the norm for NBA discussion, the seven-time rebounding champion called out LeBron James in particular, comparing him of course to Michael Jordan.

“You know what, LeBron’s doing one thing that I always said that Michael Jordan never did,” Rodman said. “He never rested. He played every game. He played every game. LeBron has the position to do this now because they need him. The league needs him that’s why he’s doing all this crazy s— now like bitching and complaining and all this [BS].”

Ironically, Jordan actually took time off from the NBA in the mid-1990s. He missed the entire 1993-94 season while playing minor league baseball and then eventually returned to the Bulls in March 1995.

Meanwhile, James, already in his 14th year in the NBA, has played more regular season and playoff minutes than Jordan had at his age.

LeBron has already literally played more regular season minutes AND more playoff minutes by the age of 32 than MJ did by the age of 40. https://t.co/P0LAby0MtV

So while it’s true that Jordan, as an active player, rarely missed a game for any reason, Rodman using that to attack James just doesn’t make much sense.

And it also doesn’t make sense that Rodman is among those attacking current NBA players who feel they need more rest. Between injuries and suspensions, Rodman played in 65 games or more only two times in the final eight years of his career.

As Warriors coach Steve Kerr quipped, Rodman got his rest by being “suspended for 15 games a year anyway.”

Steve Kerr saw Rodman complaining about NBA players resting: "I got a good kick out of that…Dennis was suspended 15 games a year anyway." pic.twitter.com/9lKzZ7OMRy

Rodman’s rant continued beyond the issue of rest, going off on watered-down “greatness” in today’s NBA compared to the 90s:

“It’s very easy to do what they define greatness [as now] —  Michael Jordan did it when it was tough, really tough. And what’d he do? Lead the league in scoring 10 years in a row. Ten years in a row, he led the league in scoring. Ten years in a row, back then, that was hard. Averaged like 32 points a game. That was hard back then. Now it’s easy. All these [expletive] triple-doubles … back then when he was getting his ass whooped, I mean beat down every game, and then when he played against us [the Detroit Pistons], he said — guess what — ‘I gotta go back in the gym.’ And he got tough. He got tough and he got great. And greater. So, that’s it.”

Again, Jordan’s accomplishments are amazing. But why does that have to take away from what today’s players are accomplishing?

Does Rodman think Jordan would have an easy time averaging a triple-double, like Russell Westbrook is about to do? MJ definitely might considering considering he had a 32-8-8 season in 1988-89, but there’s no guarantee there.