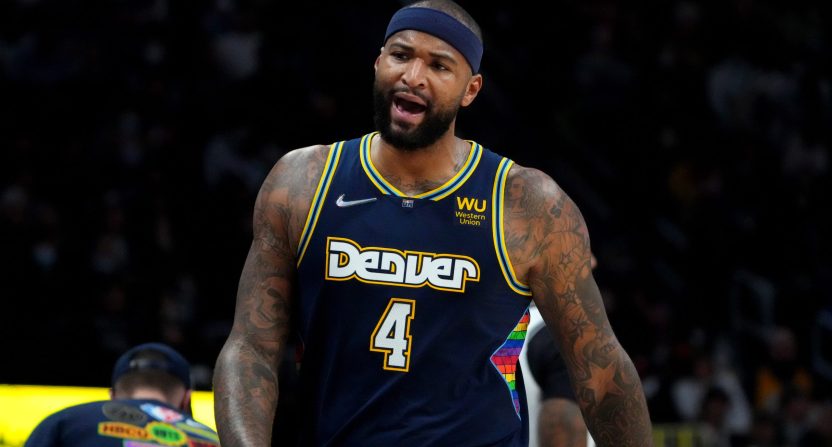 DeMarcus Cousins has had a home with the Denver Nuggets since January, and they’d reportedly like to keep him around for the rest of the season.

To this point, Cousins’ tenure in Denver has consisted of 10-day contracts. Shams Charania of The Athletic reported Tuesday that the Nuggets “are planning to sign” Cousins for a contract that will keep him in Denver for the remainder of the season.

Sources: The Denver Nuggets are planning to sign center DeMarcus Cousins to a rest-of-season contract in the coming days. Cousins’ final 10-day expired over the weekend. He’s averaged 6.1 points and 6.3 rebounds with Denver, where he’s reunited with Michael Malone.

Cousins has played exclusively off of the bench for the Nuggets. His 6.1 points and 6.3 rebounds per game don’t look gaudy. But those numbers aren’t bad when we remember that he’s averaged just over 13 minutes a game in Denver.

He’s also been a stable source of production. Cousins’ high point total with the Nuggets is 13, while his low is two. Outside of those two games, he’s been averaging between four and eight points every time he’s suited up for Denver. So, the Nuggets know what they’re getting.

The free throw totals can largely be attributed to the small sample size of only eight games and 2.5 attempts per game. When we include the 17 games he played for the Milwaukee Bucks, Cousins is shooting 77.6% on free throws this season. That exceeds his career average, which was 73.7% coming into the season.

The field goal percentage is harder to explain. On the season, he’s shooting only 41.4%. That’s below what his career average was coming into the season (46%).

Cousins’ shooting struggles have not hurt his team’s productivity. He’s suited up eight times for the Nuggets, and they have a perfect 8-0 record in those games.

Denver is 10.5 games ahead of the San Antonio Spurs, who are currently the first team outside of a playoff spot in the Western Conference. But while the Nuggets are all but assured of making the playoffs, avoiding the play-in game is a different story. Denver presently holds the No. 6 position, 2.5 games ahead of the Minnesota Timberwolves. Any slip from the Nuggets would result in the play-in games.

Given where they are in the standings, it’s easy to see why the Nuggets want to keep someone who’s done nothing but win with them around.