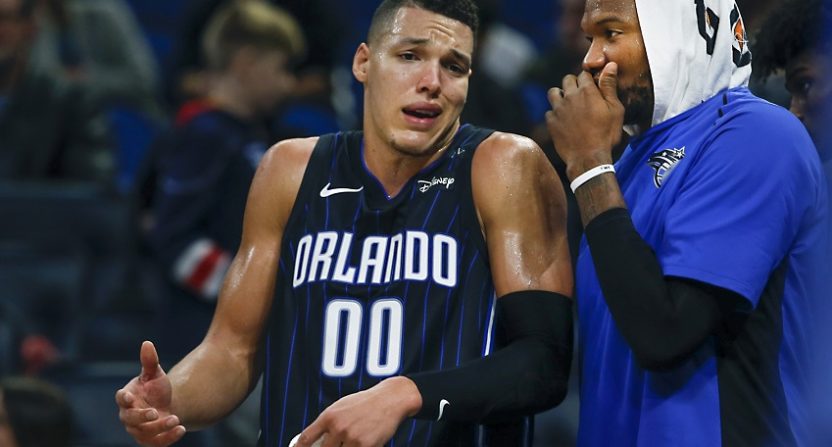 After starting the season 6-2 and 8-4, highlighted by early-season wins over Cleveland and San Antonio, the Orlando Magic have been on a steep nosedive caused by a myriad of factors.

“Injuries kind of derailed us a little bit,” Payton told The Comeback. “It kind of happened at a bad stretch.”

Payton was downplaying Orlando’s woes. Injuries have derailed the Magic a lot. Since that 6-2 start, Orlando is 6-25 to crater to 12-27, the third-worst record in the NBA. The injuries have a lot to do with the Magic being 27th in offensive efficiency and 26th in defensive efficiency. But the personnel they’ve had to work with isn’t exactly the best, either.

Rob Hennigan’s failed tenure as Orlando general manager didn’t do this current roster any favors, and the team has never really recovered from the Dwight Howard trade. He dealt his best draft pick, Victor Oladipo, in an ill-fated trade to Oklahoma City along with Domantas Sabonis for Serge Ibaka on draft night in 2016. Ibaka was traded several months later for Ross and a pick. Drafting Mario Hezonja fifth overall has been a disaster, as was trading Tobias Harris to Detroit for Brandon Jennings and Ersan Ilyasova, neither of whom are on the team now.

Drafting Gordon, who we’ll get to in a bit, was his best move as a GM, but the jury is still out on Payton, who was acquired on draft night in 2014 for Dario Saric and picks that later became Willy Hernangomez and De’Aaron Fox. (Judging executives on what those picks turned into is relatively unfair, but it’s fun and proves a point.) Without going too much in depth here, the new Orlando executive team of Jeff Weltman and John Hammond haven’t been dealt the best hand.

Now it’s the team’s job to develop young players like Gordon, Payton, Hezonja, Isaac and Fournier. But right now, this team is going through a midseason morass. Orlando scored just 12 points in the first quarter in a loss to the James Harden-less Houston Rockets on Wednesday, its lowest total in any quarter this season.

Let’s get into why the players they’re putting on the floor are performing so poorly. A lot of it has to do with the fast speed at which Orlando is playing. The Magic are seventh in the NBA in pace, the estimated number of possessions per 48 minutes.

There is just no fight in this Orlando team right now. An early January game feels like the end of the season when a team is looking towards the summer.

“That’s what coach wants,” Payton said. “He wants us pushing the ball.”

In today’s NBA, playing fast like the Magic do is designed to either get you a drive to the rim or a 3-point shot, preferably an open one. Orlando drives to the basket 48 times per game, according to NBA.com, the sixth-highest rate in the league. The problem is that it scores on just 44.9 percent of those drives, also 18th in the NBA.

“You have to get penetration to move the basketball,” Vogel said after a loss to Brooklyn on Monday. “You have to force the defense to help, and we weren’t able to do that.”

Orlando shot a ghastly 6-for-31 on threes in that game, contributing to the team ranking 22nd in 3-point percentage this season. Some of that has to do with not knocking down shots that they should. A “wide open three,” according to NBA.com, is one where the closest defender is at least six feet away from the shooter. The Magic have taken a “wide open” shot on 19.3 percent of its threes, the 12th-highest rate in the league. Its percentage on those shots is just 36.3 percent, fifth-worst in the NBA.

So the Magic have the right formula on offense, the defense is comparably in much worse shape, but the team doesn’t have the players (or the healthy ones) to execute on that end.

At this point, a lot of Orlando’s current and future success rests on Gordon’s broad shoulders. The 22-year-old beacon of optimism is averaging nearly 19 points and over eight rebounds per game on 48.3 percent shooting from the field and a vastly improved 40.2 percent from three. It seems like he still has a ton of room to grow as an offensive player and could develop into a Blake Griffin-type superstar.

“He’s a unique player in this league. He’s like a wing with a four-man’s body,” said Nets head coach Kenny Atkinson. “He’s fast, he plays extremely hard. He’s obviously shooting the heck out of the ball and it’s a credit to him for working on that shot. It’s really given him a whole different weapon.”

Unlike Atkinson, Gordon is a lot harder on himself and his team, especially after the loss to Brooklyn.

“We need to continue to mature as a team. Quickly,” Gordon said. “We’re just letting these games get out of hand.”

Gordon also said he needed to quickly mature as a player, as the team’s leader and best player. He’s still getting used to being defended like he’s the player teams are focusing on in an opponent’s scouting report.

“I take that as a sign of respect, and I appreciate that and I’m grateful for that,” Gordon said. “So I gotta figure out ways to help my team out.”

Until Gordon matures and the team gets healthy and improves its personnel, the Orlando Magic will likely continue to be on a free-fall.

For Weltman, Hammond, Vogel and the entire organization, it may take a while for them to undo the mistakes Hennigan made. That will start at the trade deadline and continue with the draft, where they’re likely to get a top-five pick in a top-heavy draft. It’ll be up to these experienced executives and Gordon, its franchise cornerstone, to guide Orlando back to the playoffs for the first time since Howard was the headliner. But until then, the Magic will be a massive disappointment, a team that’s hard to watch in a train-wreck that’s hard to look away from.