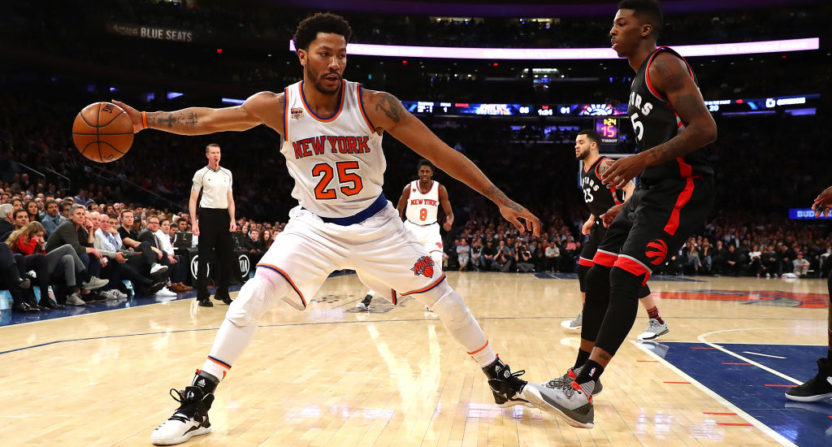 After news surfaced last week that Kyrie Irving requested a trade from the Cleveland Cavaliers, the team seems to have found its (a?) replacement point guard in Derrick Rose.

According to Yahoo! Sports, the deal is all but done.

Derrick Rose has committed to sign with the Cleveland Cavaliers and completed his physical exam today, league sources tell The Vertical.

Given Rose’s position, and the fact that he probably doesn’t want to be a backup, this looks like more of an indication that Irving will indeed be traded. However, Irving is a polarizing player—his defense can, at times, leave a lot to be desired, and he’s a streaky shooter—and it’s unclear whether the Cavs could really get very much in return for him.

If Rose is the only point guard that comes in to take Irving’s role, it could be a long season.

Rose averaged 18 points per game with the Knicks last year, but the efficiency numbers told a different story, as Rose shot just 22 percent from three and 49 percent from inside the arc. His raw numbers should decrease on a team with LeBron James, but James could also make him a better player. Still, this is not the same Rose that won the 2010-11 MVP Award and has since suffered multiple season-ending injuries.

Rose also has a questionable history off the court. He was sued for sexual assault, and while he was not found liable, he said he did not know what consent means and that he just assumed his ex-girlfriend wanted to have sex.

Despite once being the best player in the league, Rose’s value has dropped considerably, as evidenced by his latest reported contract with Cleveland.

Luol Deng and Joakim Noah each got $72 million in their last contract. Rose gets $2.1 million

It’s probably easier to revitalize a career with this Cavs team than with the current state of the Knicks, but is Rose really the guy the Cavs want? Ultimately, if this means Irving is gone, the Rose acquisition leaves a lot to be desired.

For what it’s worth, LeBron seems excited about Rose joining the Cavs: