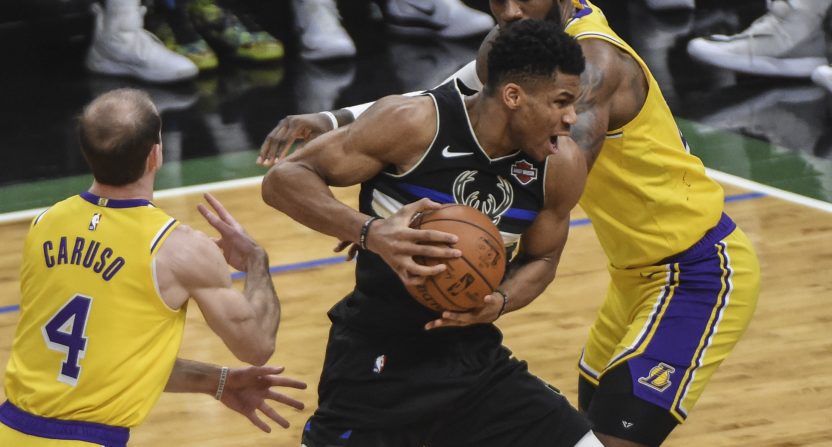 In a battle of 24-4 conference leaders, it would be the East leaders getting the best of the West as the Milwaukee Bucks defeated the Los Angeles Lakers 111-104 in Milwaukee. Despite running into foul trouble throughout the game, Giannis Antetokounmpo ended his night with a 34 point performance.

LeBron James got his sixth triple double of the season, finishing with 21 points, 12 rebounds, and 11 assists. Anthony Davis, who was playing on an injured ankle, was huge on the free throw line going 14 of 17 and ending with a game high 36 points. In the end, even that wasn’t enough for the Lakers.

The Bucks were up by as much as 21 and that was due to their three point shooting. Going 16-39 and shooting at a rate of 41 percent, a team that effective from three was going to be very difficult for any opponent. Antetokounmpo especially lit up the outside of the arc by going 5 for 8 and draining some colossally deep shots.

Giannis are you kidding?? pic.twitter.com/W4tDQNZbMa

Off the bench, George Hill overperformed in such an important game. He finished with 21 points and was 3 for 5 from three.

The Lakers were coming back thanks to Giannis being in foul trouble. While he was top scorer for the Bucks, Giannis only played 32 minutes. It may not have been what the Bucks wanted to do but the efficiency of their star player having the discipline to not foul out and maximize his scoring chances while on the court, along with the Bucks bending but not breaking against a top team while Giannis was on the bench was a major test that Milwaukee passed with flying colors. It’s still too early to tell in the wide open East but the Milwaukee Bucks have as much of a chance to emerge at the end and they can do that with more of these performances.

As for the Lakers, they return to Staples Center, completing a road trip that saw them be the away team in 12 of their last 15 games since November 22. Within that stretch, the Lakers had three of their five losses, all against solid playoff contenders. This loss isn’t exactly going to make or break the Lakers and you can argue this game was bigger for the Bucks. That being said, the rematch on March 6 should be a barnburner and the Lakers will be looking to get revenge on their home court.