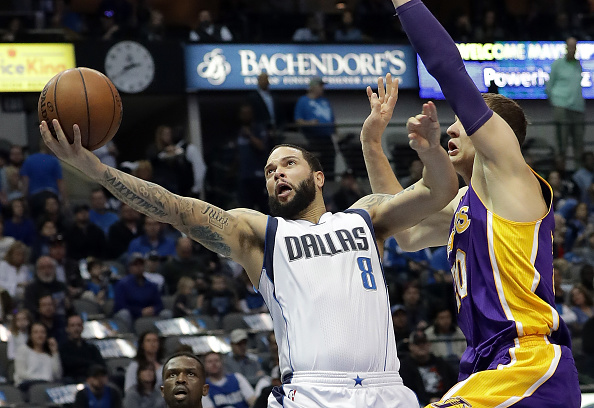 The Dallas Mavericks haven’t let a rough start stop their chances of making the NBA Playoffs.

Ravaged by injuries to start the 2016-17 season, the Dallas Mavericks won just three of their first 16 games. Starters Dirk Nowitzki, Deron Williams and Andrew Bogut missed action, while unproven backups Salah Mejri, Seth Curry and Dorian Finney-Smith logged big minutes. Dallas was dead on arrival. Tanking appeared imminent. In November, I wrote the Mavs were mediocre and bottoming out should become the club’s top priority. But as the season progresses beyond the halfway point, Dallas has found new life and is back in the playoff hunt.

Despite sitting 14 games under .500 at 15-29, the Mavericks are just 3.5 games back of the Denver Nuggets for the eighth seed in the Western Conference. Rattling off four wins in their last six games, including a nearly 50-point win over the Los Angeles Lakers, has propelled the Mavericks back into the hunt — although every team in the West is technically in. What’s changed recently? Key contributors have returned from injury.

It's raining threes at the AAC today!

Curry has proven to be a bargain on a two-year, $6 million contract. The 26-year-old is producing at a career-best rate, averaging 10.6 points on 42 percent shooting from deep. In a perfect world, Curry is an important bench piece, but getting thrown into the starting lineup has given him a real chance to shine. Barnes, meanwhile, is continuing to justify his max deal this offseason, averaging more than 20 points per game. Deron Williams hasn’t aged well, but he’s still a starting point guard in the NBA and putting up numbers above league average at his position.

The Mavs have also been boosted by the strong play of shooting guard Wes Matthews. The 30-year-old has lost a step on defense, but is hitting three-pointers at an efficient rate (39 percent) despite putting up the highest volume of shots from distance in his career (7.5 attempts per game). Offensively, Matthews is providing the expected results when signed to a max deal in 2015.

Of course, the biggest factor in the Mavs playing competent basketball is the return of franchise icon Dirk Nowitzki. The seven-footer has been inconsistent since rejoining the team from an Achilles injury, but his calming presence helped Dallas immediately. Even with his struggles, the 38-year-old is still putting up 13.0 points and nearly six rebounds. Having him on the court also keeps defenders from double-teaming Barnes, allowing the offense to flow better. When Dirk gets back on track, Dallas will see further improvement.

The healthier the Mavericks get, the better their chances to compete for the eight seed. Is Dallas a good basketball team? The jury’s still out. They’re only three straight losses away from owning the worst record in the West. Plus, those four recent wins have come against the Suns, Timberwolves, Bulls and Lakers, all mediocre teams in their own right. But in a playoff hunt where the eighth-seed Denver Nuggets are seven games under .500 themselves, the Mavericks have a legitimate shot at qualifying for the postseason — especially if healthy.

How the Mavericks proceed from here will be interesting. They may not start selling veteran contracts for future assets when the playoffs are within grasp. The best course of action for Dallas is to see where the team is at by the March 1 trade deadline and plan according to the club’s record. The Mavericks could be a playoff team — but is a first-round playoff exit against Golden State worth delaying an inevitable rebuild? Tough decisions lay ahead.