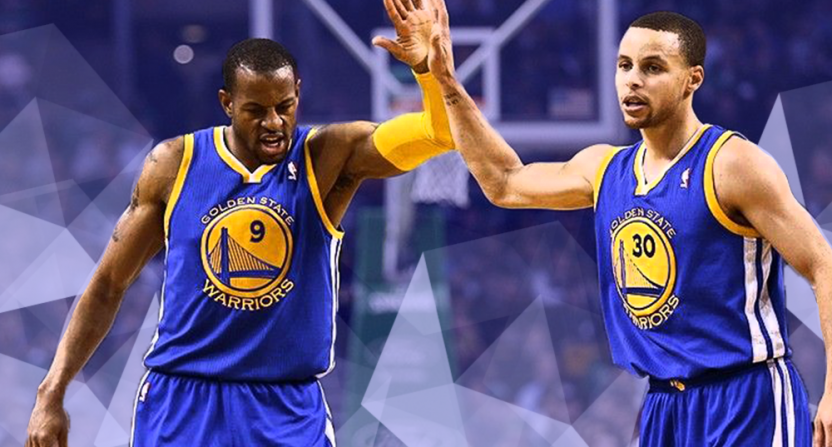 After defeating the Philadelphia 76ers Saturday night, Warriors swingman Andre Iguodala took to the mic to heap praise on his teammate, Stephen Curry. Iguodala has felt that people haven’t given Curry the respect he deserves and wants the world to know how underrated he is.

“I still think he doesn’t really get the respect he deserves,” Iguodala said after watching Curry drop 28 points in a 120-117 win over the Philadelphia 76ers on Saturday night. “Guys think he uses a lot of screens and guys think they can draw mismatches with him defensively, but he’s a real problem. I think I told [Kevin Durant], he said he missed me on the shot he took, and I said, ‘Y’all two are like Michael Jordan, there’s no such thing as a bad shot.’ That’s for real, and people don’t understand the presence they bring to the court. Especially on the offensive end.”

Iguodala, who later said that Magic Johnson is the best point guard of all time, does not think that Curry ever will get the respect he deserves.

“It is what it is sometimes,” Iguodala said. “But when you sit down and have serious conversations, that’s when you — he’s the second-best point guard ever — you argue that.”

Look, you’re not going to find too many other people who respects and appreciates Steph Curry more than myself. Curry is not only a game changer during a game, he has shifted the entire sport to take more deep shots than ever before. We can argue whether or not that’s a positive but Curry’s influence in the game since he was drafted in the NBA cannot be denied.

Having said that, I’m stopping short at calling Curry “underrated” like Iguodala is implying. He didn’t come out and outright use the word but that’s how it was taken when other Warriors players heard Iguodala’s comments.

Curry was certainly underrated at one point in his career. When he lit up the NCAA tournament as a junior at Davidson, Curry declared for the NBA Draft as the NCAA scoring leader. Despite that, Curry was taken with the seventh pick in 2009. Those chosen ahead of Curry became awesome stars in their own right (Griffin, Harden) but others were not (Hasheem Thabeet, Jonny Flynn).

Three NBA titles and two MVP awards later, Steph Curry has already cemented his place in NBA history as he is about to turn 31. When you have those accolades, it’s pretty tough to argue you’re underrated.

So why does Andre Iguodala believe this? For one thing, he has a very specific point of view as Steph Curry’s teammate. Iguodala has a unique perspective, by practicing and playing with Curry every day that it’s possible to believe that by having that kind of relationship. And it’s easy to believe others aren’t seeing what you’re seeing and feel it’s unfair.

At the same time, there is plenty of evidence that shows that the public has given Curry a lot of respect for what he has done. Sure, there are haters but everyone has haters. If you’re any good, you’re going to have some haters so let’s set them aside. Like many, Curry is playing in an era where the vast majority of players, fans and media can watch him play every game and have access to hundreds of hours of footage of him showing how great he is. That wasn’t the case in previous eras. I wasn’t alive when Oscar Robertson was playing and have only seen limited clips of him so I might have a viewpoint where I would be more inclined to put Curry above Robertson even though those who saw “The Big O” play may think that’s sacrilege.

Plus, there are a lot of lists from a variety of people using various metrics to mesaure the greatest point guards of all-time. Iguodala is correct, Magic Johnson is far and away number one, but Curry is right there with the legends. Googling “Best NBA point guards of all time” got me the following posts.

You get the point. Even in a worst case scenario, Curry is just outside the top five and is only behind some of the greatest players in NBA history, much less point guards. And the thing that is really in Curry’s favor is that he’s this high up and he’s only 30. Maybe Iguodala isn’t satisfied everyone else hasn’t seen it already but Curry is bound to be even better and should be a consensus top two point guard in NBA history by the time he retires.

More than likely, this is a psychological mindset. Andre Iguodala might be pulling a Tom Brady and playing the “no one believes in us/underdog” card to keep Steph motivated. Maybe he’s making a subtle reference to Curry’s “Underrated Tour” for unsigned high school recruits who have been rated three stars and below. While Curry didn’t really talk about Iguodala’s comments, he did write in the Player’s Tribune that being underrated and people doubting him hasn’t gone away. Whatever Curry has to tell himself to get in the mindset he has to be in to be a star, that’s cool. But don’t matter how you measure it, Steph Curry sure isn’t underrated.